The more premium of the two Nexus smartphones Google launched this year is the Nexus 6P. This svelte 5.7-inch phablet is interesting in a number of ways. It’s made by Huawei, the first time that Google has partnered with the Chinese multinational company to build its Nexus devices. It’s also the first Nexus smartphone to be of premium build quality. 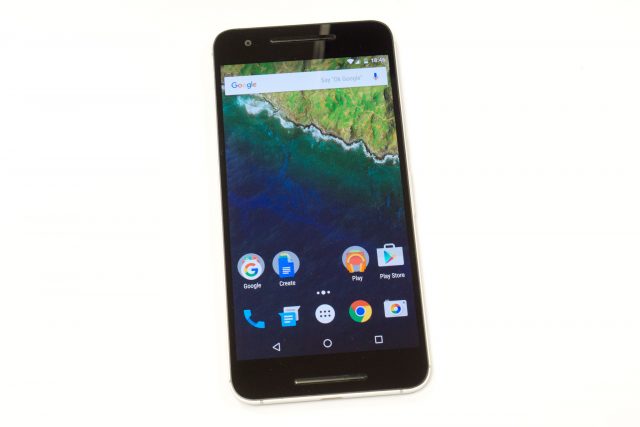 This is Google’s second stab at a phablet device. Their first, the Motorola Nexus 6 which the 6P directly succeeds, wasn’t a big hit, to put it gently. The Nexus 6P seems to get most things right, including the pricing part. Not only is the Nexus 6P better than the Nexus 6 in terms of hardware specifications, design, and build quality, but it is also cheaper.

For the first time, this Nexus smartphone has an all-metal unibody design. The Nexus 6P is clad in anodised aluminium, with flat right-angled sides and chamfered edges. Its understated design is simple yet elegant. The back, on the other hand, give it some character.

There were some early concerns about the design of the Nexus 6P’s back. Leaked photos and renders had revealed a rather obnoxious black bulge on the back of the phone, at the top, where the rear camera is. Fortunately, the real Nexus 6P turned out to look really, really, good. It’s the finest built Nexus smartphone to date, and we’ll take a look just how so with a physical tour of the device.

The front face of the Nexus 6P is covered by a clean sheet of Corning Gorilla Glass 4. Like how it has been with other Nexus devices, there are is no branding on the front. Some people may say the design is uninteresting, but this is exactly how I like my phones to be. The flat glass is interrupted only by the two front-facing stereo speakers, one at the top and the other at the bottom. You can make out the 8 MP front-facing camera to the left of the top speaker.

A huge 5.7-inch AMOLED screen occupies most of the front of the Nexus 6P. It has 1440 x 2560 resolution, or about 518 ppi pixel density, far more pixels than your eyes can discern.

AMOLED screens are noted for their deep blacks and rich colours. With AMOLED screens, individual pixels are lit independently. Black pixels are simply not turned on, and thus consume no power. This is unlike traditional LCD where a common backlight is turned on for the entire screen, regardless or what or how much is displayed on the screen.

This characteristic of AMOLED makes it advantageous for Android’s Ambient display, a feature that momentarily wakes up the display to show notifications whenever you pick up or prod the device, or when a new notification arrives. Since most of the pixels on the screen aren’t lit up when Ambient display shows a notification, they won’t consume power. In fact, Google turns on Ambient display by default, and doesn’t even mention the existence of the conventional LED notification light on the Nexus 6P. Oh yes, that LED is present, on the left of the front-facing camera, and you have to enable it in Settings, because it’s disabled by default.

On the left side of the Nexus 6P, you’ll find the SIM tray slot for a nano-SIM card. Interestingly, the SIM tray looks like it could hold a second SIM, but the space for it has been blanked out by a piece of plastic. There seems to be a corresponding space on the motherboard, according to photos revealed in iFixit’s teardown. The speculation is that dual-SIM support had been planned initially but was somehow nixed eventually.

A single USB Type-C port appears on the bottom side of the Nexus 6P. This port supports only USB 2.0, in case you’re wondering, and not the faster USB 3.1 speeds. Incidentally, if you’re confused about the new USB standards, you can read my blog post about it.

Some people may like USB Type-C, while others may not. I think of USB Type-C as the way forward, seeing that quite a number of devices are already adopting Type-C ports. It may be a little inconvenient initially as you grapple with different cables and adapters, but this is a bridge you’ll have to cross some day.

A nice thing about the Type-C on the Nexus 6P is that you can use it to charge another Type-C device. Yes, it’s like your Nexus 6P can double up as a smallish battery bank.

The most distinguishing part of the Nexus 6P’s design is on the back. There’s the usual Nexus branding printed in landscape across the back. Google has also chosen to place the Nexus Imprint fingerprint sensor on the back, which seems to work pretty well except that you can’t unlock your phone with your fingerprint when it is lying on its back, such as when it’s placed on the table.

Then, we come to that black bulge at the top. It’s come to be called the visor, and is the subject of much debate over its design aesthetics. This area is covered with Corning Gorilla Glass 4. It houses beneath it the main 13 MP camera, dual-tone flash, and laser auto-focus mechanism.

The visor also serves another important function. You see, the problem with a metal phone body is that radio signals don’t go through them. The antennas for cellular radio, GPS, Wi-Fi, Bluetooth, and NFS, they are cleverly hidden beneath the visor. Another area at the bottom of the phone, which looks visibly different, is made of plastic to also allow the antennas to do their work. There are also some antenna lines extending around the corners of the phone, similar to lines you find on recent iPhones.

Now, many people have worried over the ugliness of that visor. It’s actually not that bad. The bulge is really minimal. The photo below shows how subtle the bulge is. You could almost think of the minimally protruding visor as a design feature. It’s not bad looking at all, and I’m honestly not making up an excuse for it here.

The all-metal construction of the Nexus 6P, save for a bit of glass and plastic, is really very good. It’s the first time that a Nexus smartphone has been built to feel premium and it really succeeds in that regard. The unibody frame is solid, with no hint of flex through normal handling. It has an appropriate amount of heft. This slab of metal and glass feels really exquisite. If I had to complain a little, the metal back does seem a little slippery. Fortunately, the flat right-angled sides with chamfered edges not only looks modern but also helps make the Nexus 6P easier to grip.

A big thing with this year’s Nexus smartphones is the inclusion of the Nexus Imprint fingerprint sensor. It is absolutely amazing. It works. It works very well, and it works very fast. It will work perfectly all the time if you care to place your finger properly on the sensor, and it will probably still get it right most of the time even if your finger is slightly off. Nexus Imprint is really impressive.

In fact, Nexus Imprint works so well it quickly becomes second nature. Nowadays, when I pick up some other phone, I find myself moving my index finger to feel for the sensor on the back of the device, before realising that there isn’t a Nexus Imprint there.

The Nexus 6P is among the first devices to run Google’s latest Android operating system, Android 6.0 Marshmallow. Marshmallow isn’t the focus of this post, but let me quickly mention a few new features, such as Now on Tap and Doze. Google made Now on Tap to be a big thing but I’m honestly not totally wowed by it. In principle, you can press and hold the Home button to invoke Now on Tap, which then scans what you have on your screen at that moment and brings up contextually related search results.

Doze, on the other hand, is a fairly useful feature that puts the Nexus 6P into a kind of deep sleep when Android detects that the device hasn’t been moved for a while. Basically, if you leave your phone on the table and don’t use it, Android will stop apps from running their background tasks as frequently as they otherwise would.

Other nice features of Android Marshmallow include a better way of dealing with app permissions. Android will ask you for permission, not just at the time of app installation, but at the point in time the app firsts wants to access something, so that you can better decide whether or not you want to let the app do what it wants to do.

Nexus devices have never had great cameras. It’s now changed with the Nexus 6P and 5X, both sporting the same 12.3 MP main camera which features a larger than usual 1.55 μm pixel size, f/2.0 aperture, and laser auto-focus. The new camera takes better photos indoors, in less than ideal lighting conditions, with quicker and more accurate focusing. I’ve found photos on the Nexus 6P to be good enough that I’m taking more photos with it, and perhaps lesser on my regular Sony Alpha a6000 camera.

In the connectivity department, the Nexus 6P has everything you’d expect from a flagship. There’s Wi-Fi 802.11 a/b/g/n/ac dual-band wireless, Bluetooth v4.2, GPS with A-GPS and GLONASS, and NFC.

Cellular connectivity options of the Nexus 6P is quite impressive. Yes, it has LTE Cat 6 with support up to 300 Mbps downloads and 50 Mbps downloads. But the impressive bit is how regardless which version of the phone you get, USA or global (aka Rest Of The World) model, you have 2G, 3G and 4G bands that will pretty much get you a working signal anywhere in the world. For example, even if you get the USA model of the Nexus 6P, it has LTE band 3 and 7 that works in Singapore, differing only in the lack of LTE band 8 which is available in the global model.

Battery life is one of the biggest bane to smartphone users. Fortunately, the Nexus 6P packs a decent 3,450 mAh of battery capacity. In my experience, I can get by with a long full day, which is often some 16 hours off the charger, with moderate usage and even some occasional games, and still not run flat. Doze works very well with the Nexus 6P.

The Nexus 6P is really a great smartphone. But there are a few misses, ones that fortunately are not terribly important. There is no wireless charging, for example, and there’s also no support for Qualcomm’s Quick Charge. The idea is that USB Type-C offers fast enough charging that you don’t need these other charging features. The Nexus 6P’s main camera also lacks optical image stabilisation, but electronic image stabilisation and better light-collecting capabilities of the new 1.55 μm sensor pixels might just do the trick.

The Nexus 6P is available with internal flash memory capacities of 32 GB, 64 GB and 128 GB, and Aluminium, Graphite, and Frost (white) colour options. There may be more, or less, variants in other country-specific markets. The U.S. pricings are:

Huawei’s distributor in Singapore, Convergent, sells the 64 GB and 128 GB models at S$949 and S$1049 respectively on Lazada. They are available only in Aluminium and Graphite colours.

You can get details of the Nexus 6P specifications on GSM Arena.

It’s easy to see that Google’s new flagship Nexus 6P is set to be a big hit. For the first time, Google has put together a great combination of really good hardware specifications, excellent build quality, and yet selling at a decent price.