The ASUS ZenFone Max is pretty much an all-around decent Android smartphone. But it’s really big on one thing. Very big. It has a huge 5000 mAh battery life. It’s like the phone has a power bank attached to it, which perhaps is pretty much what some people already have most of the day, a power bank tethered to their phone. 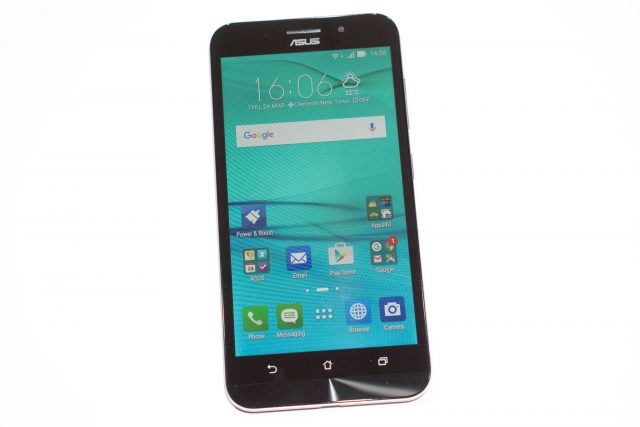 The ZenFone Max joins ASUS’ very long line of ZenFone smartphones that precede it. This one is positioned in the mid-tier, with pretty adequate hardware specifications, and of course, stands out with its humongous battery capacity. You actually can use the ZenFone Max as a power bank to charge your other devices.

In terms of design, the ASUS ZenFone Max is quite plain looking. It is a little thicker than normal, at 10.6 mm, quite necessary to accommodate its battery. The front sports the familiar ZenFone style design, a face covered mostly by glass, Corning Gorilla Glass 4 in this case, and their signature concentric pattern bezel at the bottom of it. The capacitive buttons at the bottom are not backlit. They are designated by reflective markings, though it would be a challenge to find them in the dark.

You get a MicroUSB port at the bottom of the phone, with the microphone hole beside it. While several premium phones have gone with USB Type-C ports by now, MicroUSB probably remains a good choice for those looking for a more budget-friendly device, since it will save them buying new cables or adapters.

The volume rocker and power button are located on the right side of the phone. They are comfortably positioned, easy to reach, and provide good tactile feedback.

There’s nothing on the left side of the phone. The metal-like frame around the sides do look quite nice, but alas, it’s only for looks, because it’s not really metal. 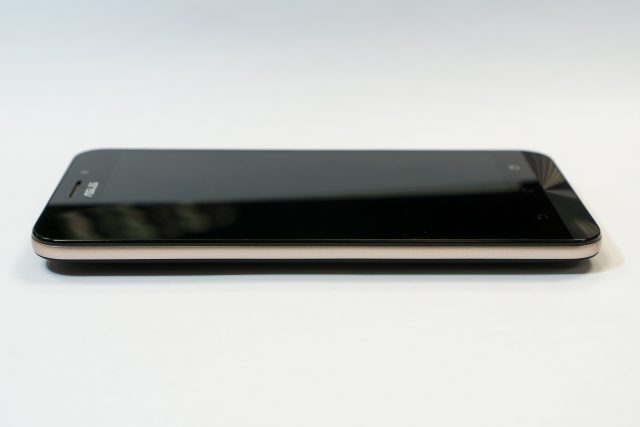 The back of the phone is covered in a sort of faux leather material. It gives a good comfortable non-slip grip to the phone. Combined with the thickness and curves on the back toward the edges, this is one phone that will not easily slip out of your hands.

The back cover, incidentally, is removable, but the battery itself is not replaceable. The removable back enables you to access the dual-SIM slots. Frequent travellers will probably love the dual-SIM. Unfortunately, only one SIM supports up to 4G LTE. The other supports only 2G/3G connectivity.

There’s also a microSD slot on the back, enabling you to expand the built-in 16 GB storage, somewhat inadequate by today’s standards, with up to 64 GB of additional storage.

On the back of the phone, you’ll find a single speaker. Due to its position, the volume is somewhat subdued when the phone is placed on its back, as you would normally do when you set it down on any surface. Apart from that, the speaker volume gets pretty loud, but quality is only just average.

The front display is a 5.5-inch IPS screen with 720×1280 pixels resolution. That resolution might not be the most impressive, especially for people who case after specifications, but it’s quite adequate for many people. The lower resolution means less battery power is needed to drive the screen. The screen’s also really bright, with 450 nits of brightness according to ASUS, and in my tests, stands out quite well even under sunlight.

Fewer pixels also mean you don’t need the best processor. The ZenFone Max is powered by a Qualcomm Snapdragon 410 processor with 2 GB of RAM. This is a quad-core processor clocks at 1.2 GHz.

Even with very heavy use, the ZenFone Max easily lasts over one day. A more moderate use can easily see the ZenFone Max last through two whole days. ASUS says the ZenFone Max will last up to 38.1 days on standby. The phone can also provide 37.5 hours of 3G talk time, 32.5 hours of Wi-Fi Internet usage, and 22.6 hours of video playback from local storage.

The best part of it is that the ZenFone Max can actually work as a power bank to charge other devices. You do need to have an OTG cable handy though, and ASUS does include one in the box.

The ZenFone Max runs Android Lollipop. It’s kind of disappointing considering the phone was released in 2016, after Android Marshmallow had already become available. If you crave the latest Android software, unfortunately I don’t think the ZenFone Max is going to get the update any time soon.

I’m not bowled over about the plethora of ASUS apps installed in the phone. However, some apps, like the Power Saver app, might come in useful for those who need to fine-tune their device to extract the most battery power out of it. The PowerSaver app enables users to configure battery modes and battery optimisation settings. For example, one can disable data network whenever the device is asleep, and automatically re-enables it when awake. If you feel the need to extract the most amount of battery life out of the ZenFone Max, I’m sure you’ll be pleased with these options.

There are many cool tricks that ASUS has put in their phones. If you are familiar with any other smartphones from the ZenFone series, you probably know about many of them already. You can tune the screen colour temperature, for example. You can lock your apps for some extra privacy. Then, there’s also their own theme engine to help you personalise the phone.

I’ve not talked about the price yet. At just S$249, the ZenFone Max is quite a steal. You can purchase the ZenFone Max at ASUS brand store, ASUS authorised dealers, Singtel, and StarHub.

The ASUS ZenFone Max is an all-around decent, capable, Android smartphone with a humongous 5000 mAh battery that can be used to charged other devices.