I’ve used a few notebook stands in the past, and I think this ErgoSilver stand from LaptopStand.sg is the best I’ve come across. Instead of foldable and multifunction contraptions like most stands try to be, the ErgoSilver is a fixed, single-purpose, stand that holds only the notebook, and holds it in only one way.

One of the hallmarks of Apple’s product design is simplicity. They are elegant. They don’t do many things, but the thing they were built to do, they do that very well. I think this pretty much describes LaptopStand.Sg’s ErgoSilver stand.

In fact, although I expect that the ErgoSilver can hold other notebooks equally well, it was probably made specifically for Apple’s notebooks. The sandblasted and anodised aluminium finish says it all. It matches perfectly the aluminium on my Retina MacBook Pro. 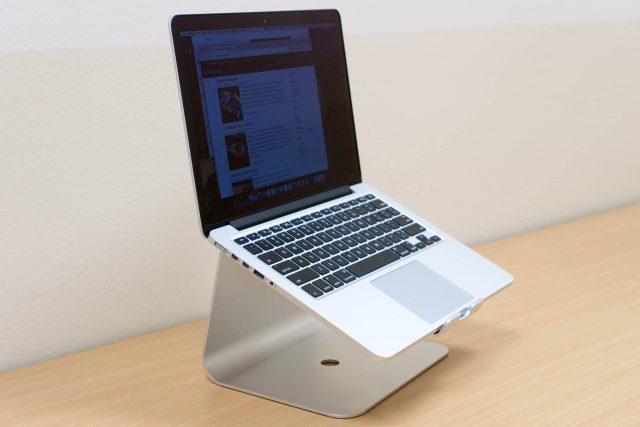 The ErgoSilver is a really simple fixed stand. It’s all aluminium. The solid metal build gives it heft and stability. With no parts to fold, collapse, or move, the entire stand is extremely sturdy. This is a very well built stand.

Even with the ErgoSilver holding up my Retina MacBook Pro, I can type on it and not feel like the stand is wobbling all over. Of course, given the height at which the ErgoSilver raises the notebook, you’re not supposed to type on it anyway, but use a separate keyboard instead.

The ErgoSilver holds up notebooks high enough so that the screen sits very comfortably at my eye-level. Despite this stand not being adjustable, the height should hold up well for most people.

In case you’re worried that the aluminium stand will scratch your precious notebook, fret not. Of course, they’ve not forgotten to put rubber pads everywhere it’s needed, including on front lip as well as the underside where the ErgoSilver sits on your desk.

There’s a plastic gasket around the hole on the back of the stand so you can safely run your cables through without worrying about damage. 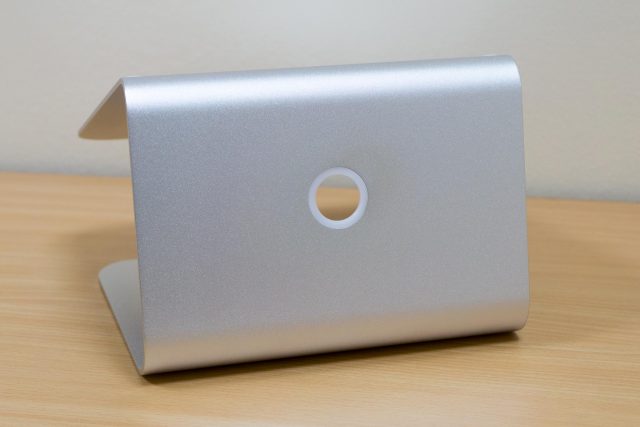 Weighing in at 1.21kg, it’s no wonder that the ErgoStand is so sturdy. LaptopStand.Sg says it will hold up to 18-inch notebooks, and although I don’t have one to test, I believe that shouldn’t be a problem at all.

The all metal build, with standoff pads, will keep the notebook very well ventilated and cool. This is an added bonus for using a notebook stand. No more heat trapped on the table.

You can buy the ErgoSilver from LaptopStand.Sg at S$49.90. They also have other stands like the ErgoSilver2, which sits low enough that you can still use the notebook’s keyboard.

If you’re a Mac notebook user looking for a notebook stand, look no further. This is the one.