OPPO might not have such a recognised brand name, but this Chinese smartphone manufacturer is no small player. Their smartphones are usually quite well regarded, and while not the cheapest, they are very reasonably priced. Their latest product is the OPPO R9s, first launched in China, but is now available in Singapore.

I shared a quick first-look of the OPPO R9s earlier this month. It looks really good, and has a remarkably similar design to the iPhone 6s. This 5.5-inch device has a really solid all-metal build quality, and at just 6.6 mm thin, this smartphone looks like it’s going places. It’s also light, at just 145 g.

The OPPO R9s is awesome in many ways, though looking at the specs in detail it might not quite clearly fall into top-end premium device category. We’ll take a look at them in detail.

On the front of the OPPO R9s, the 5.5-inch AMOLED display covers 73.4% of the body, leaving just a small amount of bezel space. The home button on the front is capacitive, and integrates a really awesome fingerprint sensor I’ll talk about more later. The front is covered by beautiful 2.5D Corning Gorilla Glass 5.

The downside with the display is that it’s “just” Full HD, 1080×1920 resolution. It’s plenty enough, with 401 ppi pixel density, but these days with other flagship sporting QuadHD, some people might have hoped for better.

The front facing camera has 16 MP resolution with a f/2.0 aperture.

On the left side of the OPPO R9s, you’ll find the volume rocker. The power button is on the other side. 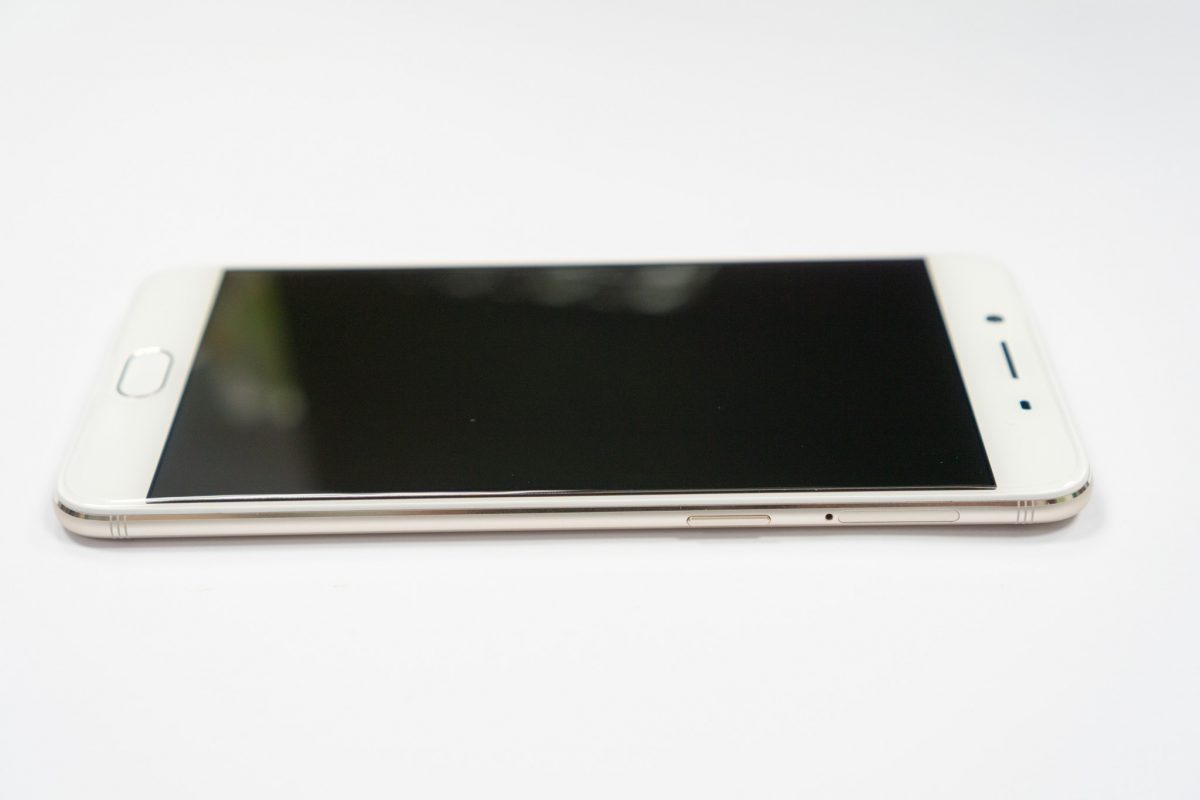 The right side also has the SIM card slot, with a tray that holds two SIM cards, one of which can be swapped for a microSD card. Notice the two sets of triple-lines on either side of the phone. These are OPPO’s version of the antenna lines, which you’ll get to see more of it on the back. 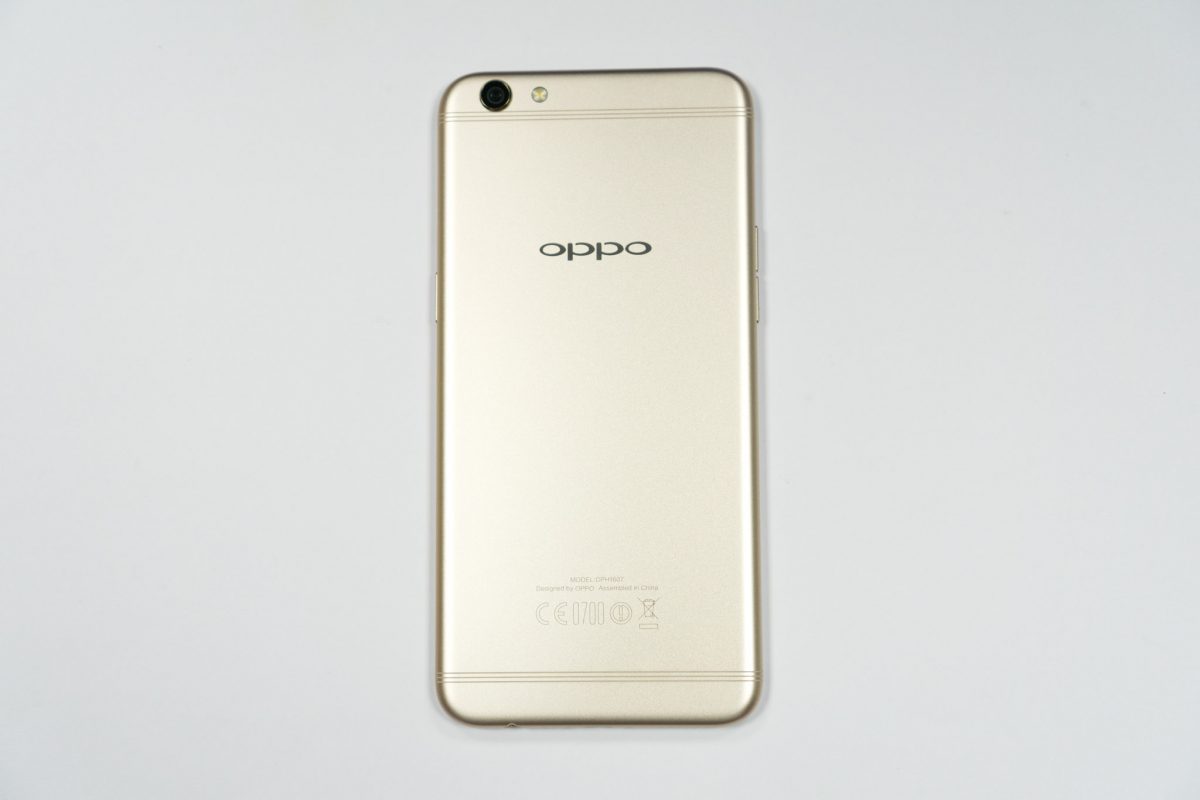 Now coming around to the back, notice again the great similarity to the iPhone 6s. However, instead of thick antenna lines, OPPO has gone with sets of three thin lines. So while it looks the same, it’s not quite the same.

The main camera on the back has 16 MP resolution, with a really fast f/1.7 aperture, phase detection autofocus and LED flash. The camera captures shots quickly. There is no OIS on this camera. However, without the benefit of detailed analysis, I’d say that the still image quality is reasonably impressive, though lesser so for videos.

On the bottom, you’ll find speaker holes, MicroUSB, and the good regular 3.5 mm audio jack. USB-C might have been nice, depending on whether you’re already onboard the USB-C bandwagon. 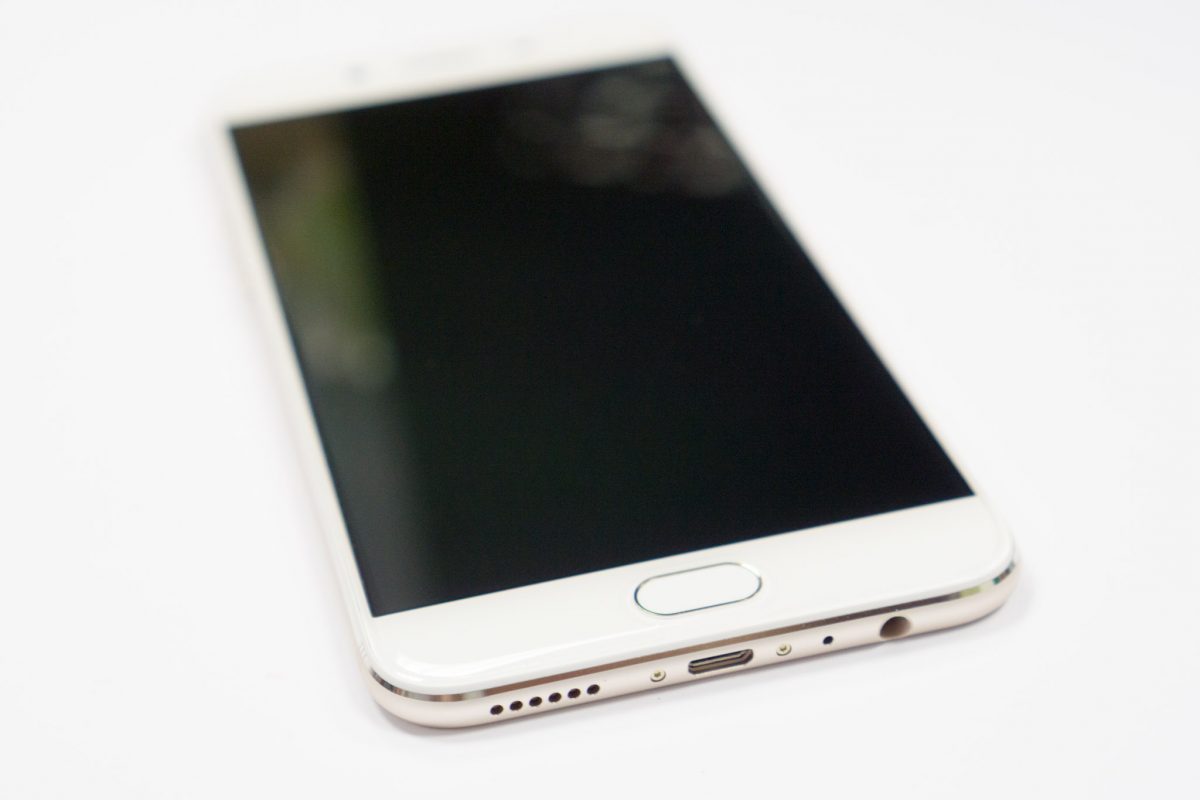 The all-metal build of the OPPO R9s is really impressive. The unibody chassis is absolutely solid. The device also fits very well in my hands. This smartphone may have a 5.5-inch display, but it’s still very compact-sized.

Under the hood, the OPPO R9s is powered by an octa-core 2.0 GHz Cortex-A53 Qualcomm Snapdragon 625 processor with an Adreno 506 GPU. Without the Snapdragon 820 or even 821, some might argue that the OPPO R9s is at best placed below the top-end tier of smartphones. In regular casual use, however, the OPPO R9s never felt that it was slow or struggling to catch up user interactions. with 4 GB of RAM, the OPPO R9s is sufficiently capable of juggling multitasking loads.

The built-in non-removable 3010 mAh battery might not seem huge, but with a lower resolution display, the OPPO R9s’ battery life is actually truly awesome. It will most definitely last over one day even with somewhat above average use. With light use, the OPPO R9s can push two days.

The OPPO R9s runs their flavour of Android, ColorOS, now at version 3.0.0i. It is based on Android 6.0.1. I had hopped for Android 7.0 Nougat. ColorOS is sort of styled on MIUI, or to put it another way, like iOS. It’s a matter of preference, and while I am not terribly fond of this style of Android, the good thing is that ColorOS doesn’t otherwise overly skin the interface. It’s easy enough to navigate through ColorOS.

Now, let me talk a bit about the fingerprint sensor. It’s insanely fast! Many other phones talk about their fast fingerprint sensors, but this is fast on a different level. You know with other phones you actually need to consciously place your finger on the sensor, but with the OPPO R9s, you can pretty much “tap” on the sensor. Yes, just tap for just a brief moment and lift up your finger. The OPPO R9s recognises your finger and unlocks the device.

When I showed this off to my friends, they thought that perhaps the phone wasn’t even reading the fingerprint, that it was simply unlocking because the home button was pressed. That’s not the case. Tapping the home button with unregistered fingers did not unlock the phone.

Another nice touch that OPPO has added is the ability to configure specific fingerprints to make calls or launch applications directly. For example, I can set my right thumb to unlock and then launch the camera application immediately.

A good thing with OPPO, in general actually, not just with the R9s, is the two year warranty coverage. That’s right, while most manufacturers offer only one year warranty, OPPO had set out to differentiate themselves by offering two years of warranty coverage. In addition, there is one-time free accidental damage repair during the first year. 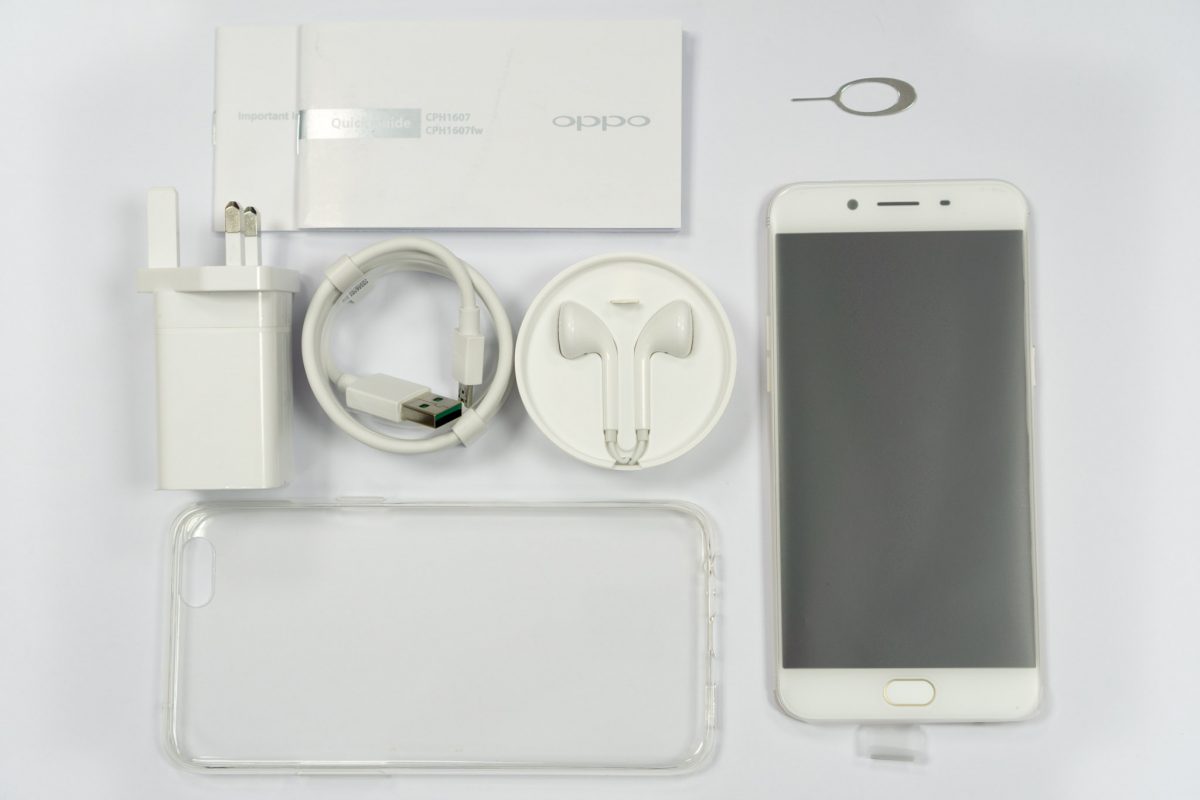 Included in the OPPO R9s box, you’ll find the usual SIM tool, earphones, charger and USB cable. What’s unusual is that OPPO has also through in a TPU case, which fits the OPPO R9s really well, as well as a screen protector that’s already applied on the device.

The OPPO R9s retails for S$679 from OPPO Concept Stores and all M1, SingTel and StarHub stores. Gold colour is available now, while the Rose Gold colour will arrive some time in January 2017.

The OPPO R9s may look like an iPhone, but it’s a really impressive one on its own.