If you’re a small business, but Internet connectivity is absolutely critical for you, a cool dual-WAN router like the ASUS BRT-AC828 could be something you want to consider getting. With two WAN ports to connect to different ISP in either load-balancing or failover configuration, you can ensure that your Internet keeps going, even if one of the ISP is down.

The ASUS BRT-AC828 is designed for businesses. It comes with 8 Gigabit Ethernet LAN ports, doube the number of the usual port count on most consumer routers, so in a small office setup, this could suffice for all your LAN connectivity needs.

There are also numerous features that make the BRT-AC828 really useful as an all-in-one network solution for small businesses. For example, it supports guest Wi-Fi network, including captive portal with a customisable splash page, so you can conveniently offer a branded Wi-Fi experience to your customers. Four of the eight Gigabit Ethernet LAN ports can be aggregated together to create a 4 Gbps logical connection to a server for high bandwidth applications.

It may be an overkill, but the BRT-AC828 supports M.2 SSD, installed in a slot on the underside of the router, which is used to create a small network-attached storage (NAS), allowing for file backups, storage, or sharing. 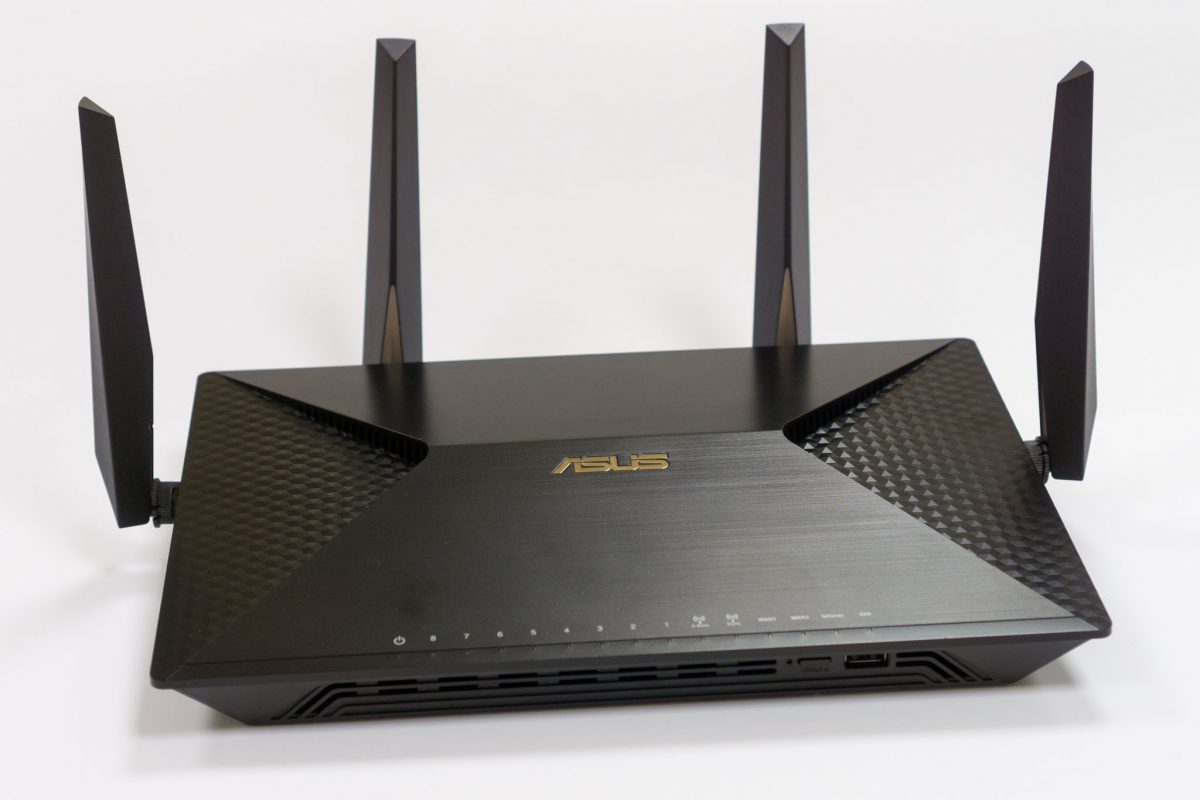 Physically, the BRT-AC828 router is bigger that the typical consumer router. The front features a good number of LED indicators. This is expectedly so, since it has double the typical LAN ports, double the typical WAN ports, and still featuring dedicated status LEDs for the two Wi-Fi bands, failover status, and the M.2 SSD.

There’s one USB 3.0 port on the front, with an eject button and LED status beside it. This is one of two USB 3.0 ports available on this router. 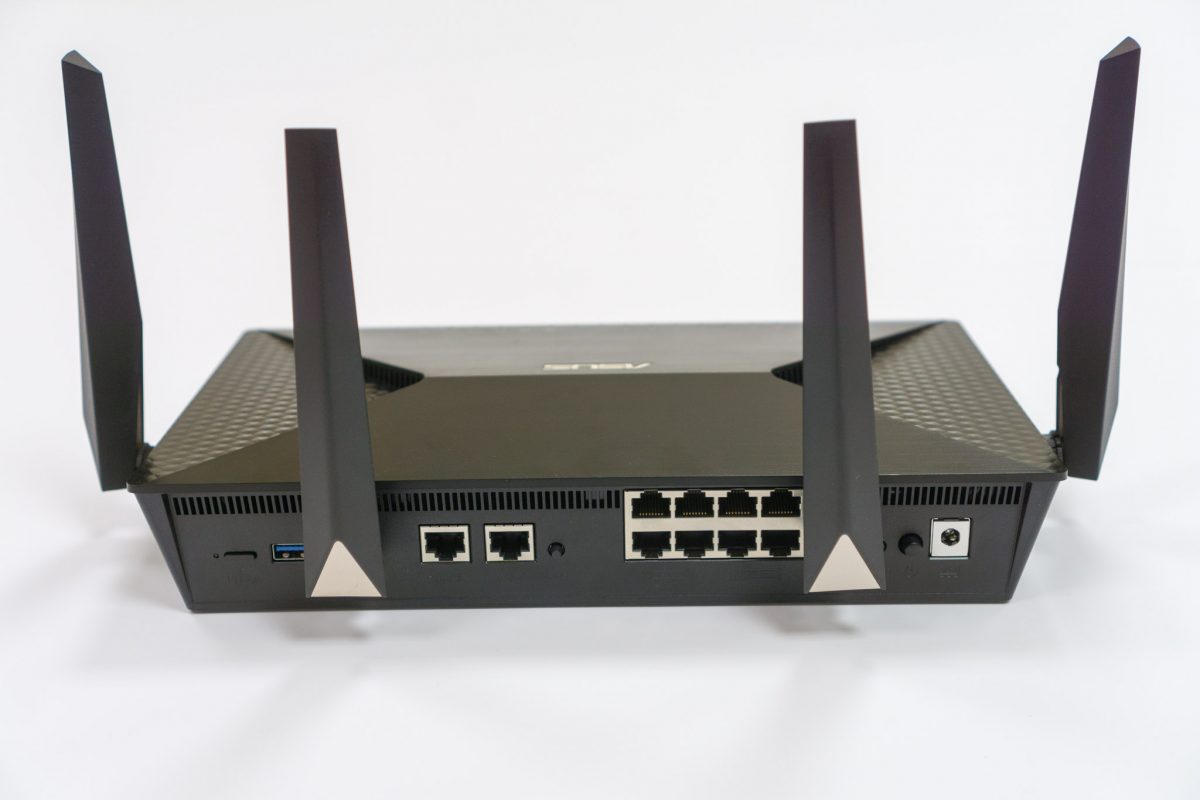 The back is similarly crowded, since there are double the LAN ports and WAN ports.  The second USB 3.0 port is on the left, with its corresponding eject and LED indicator beside it. On the right end, there’s a DC input port and a physical on-off power switch. The BRT-AC828 supports WPS, and the WPS push button is in the centre of the back panel.

The BRT-AC828 has four external antennas. It supports 4×4 MIMO antennas which should provide good, stable, Wi-Fi throughout a small office. ASUS AiRadar beamforming technology will help ensure all Wi-Fi clients get the best possible Wi-Fi signal.

The router supports dual-band 802.11 a/b/g/n/ac, with speeds up to 800 Mbps on 2.4 GHz band and 1733 Mbps on the 5 GHz band, for a maximum Wi-Fi speed of 2.53 Gbps. In addition to the usual WPA and WPA2 Personal, which uses Pre-Shared Keys like in consumer Wi-Fi routers. the BRT-AC828 supports WPA and WPA2 Enterprise. The Enterprise mode uses Wi-Fi keys negotiated dynamically on a per-client basis, and rotates frequently, thus making Wi-Fi attackers more difficult.

The web configuration interface in the ASUS BRT-AC828 is really nice. It’s relatively straight-forward to connect up the router. Understandably, the more advanced features may require some technical knowledge. For example, the dual WAN ports can be configured either as a load-balanced so that you can use bandwidth on both ISP links, or in a failover setup where one is a standby link that takes over whenever the primary link fails.

The BRT-AC828 router has built-in support for VPN servers and clients. You can use the router in a network-to-network VPN, or for individual remote users to use VPN to connect into the LAN. PPTP, OpenVPN and IPSec VPNs are supported in both server and client modes. There is also additional L2TP support in client mode.

Some of the firewall filtering features that are common in enterprise networks is implemented in the BRT-AC828. This includes web content filtering, URL filtering, keyword filtering, apps filtering, and several more.

Many of these filtering and firewall features are likely nice bonus features to have for a small business.

I like, in particular, the built-in Intrusion Prevention System (IPS). ASUS calls this AiProtection, and the feature works in conjunction with Trend Micro’s service, which uses real-time network monitoring to detect malware, viruses and other intrusions. AiProtection also prevents infected devices on the LAN from leaking information to external parties. Of course, AiProtection doesn’t compare with enterprise IPS appliances, but it does offer small businesses some protection, and that’s always better than not having anything at all. 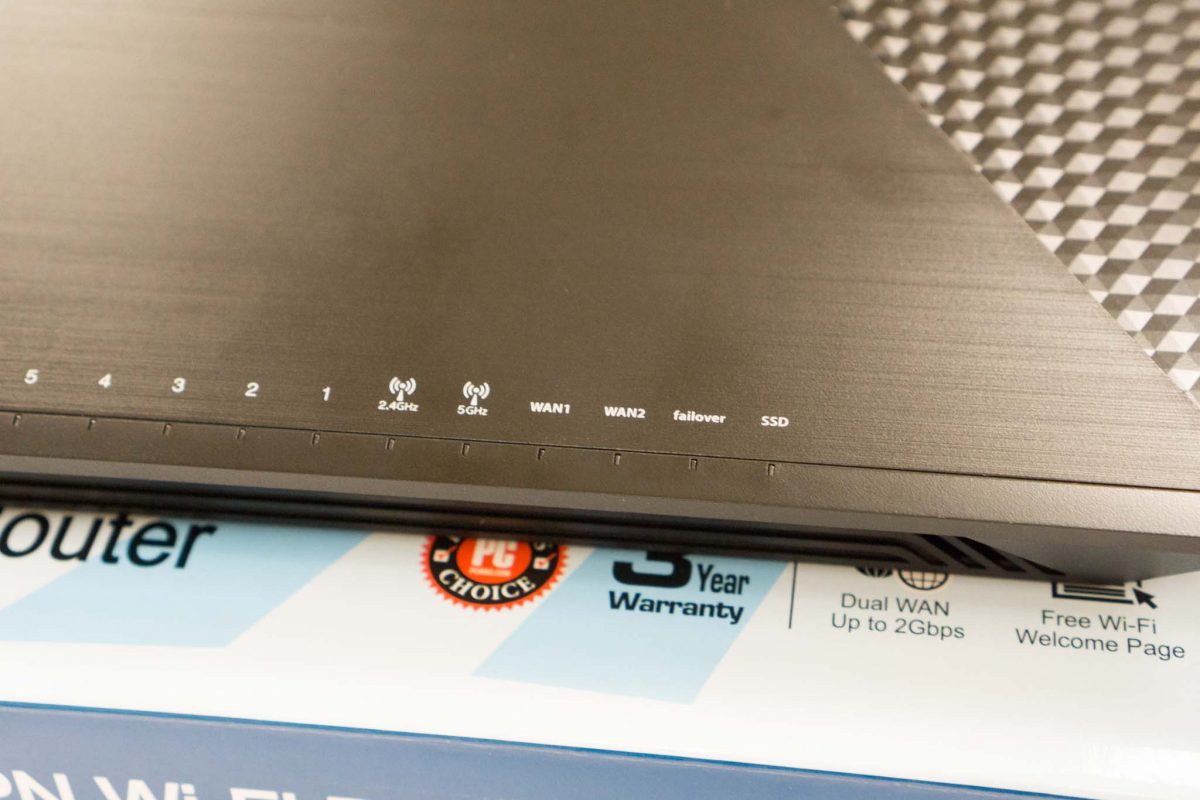 The ASUS BRT-AC828 router doesn’t just route between a WAN and LAN. It has comprehensive VLAN support, allowing you to create multiple VLANs, each in their own IP subnets. This is really useful for, at least, segregating servers in their own network for increased security. The LAN ports can be individually configured with tagged VLANs in an 802.1q trunk.

Other features of the ASUS BRT-AC828 include QoS, IPv6, RADIUS server, and several others you’ll expect only in enterprise networks.

I’ve mentioned the dual-WAN port feature on the ASUS BRT-AC828 several times. The Dual WAN feature, however, doesn’t necessarily have to be another Internet connection on the second WAN port. You can setup a USB modem, or even tether to an Android smartphone, and have that function as your failover Internet connection. This arrangement can be very useful, because as you might know, even with two fixed fibre broadband connections to different ISPs, the fibre link to your premises is still a single point of failure, and we just saw how subscribers in Jurong West this week suffered an fibre broadband disruption due to NetLink Trust’s fibre breakage. 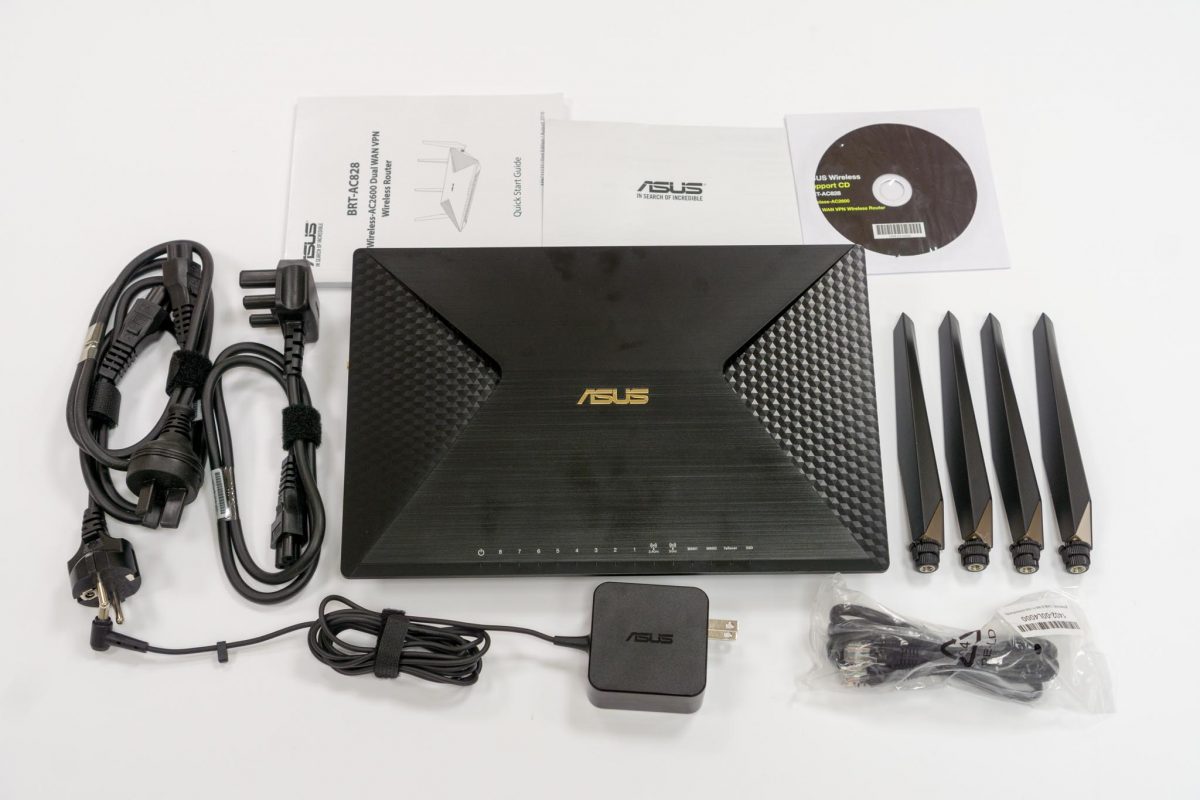 I have not reviewed a business-type Wi-Fi router like this ASUS BRT-AC828 until now. However, since I’m familiar with managing enterprise-type networks, I find myself really fascinated with the features offered by this ASUS BRT-AC828. Many of these features are really good to have, such as the better security offered by WPA2 Enterprise, among many others, but they are often out of the reach of small business owners.

ASUS AiProtect is nice, but unfortunately enabling it will disable a number of very useful or even necessary features, such as load-balancing and NAT. It’ll be nice to future updates that allows more, or even all, the advanced features to be used together at the same time.

The ASUS BRT-AC828 router is available at $559 with three years of warranty included.