With its dual rear camera setup, the first from ASUS, the ZenFone Zoom S is clearly focused on improving photography performance. It also boasts extreme low-light camera capabilities, and a 5,000 mAh capacity battery yet still encased in a slim, svelte, body, the ZenFone Zoom S looks to be scoring points in all the important areas.

The ZenFone Zoom S is positioned somewhere above the mid-tier of Android smartphones. It’s a capable device, though it misses in some areas. However, with many users now wanting to take better photographs on their smartphones, the ZenFone Zoom S could be just the right smartphone for them. 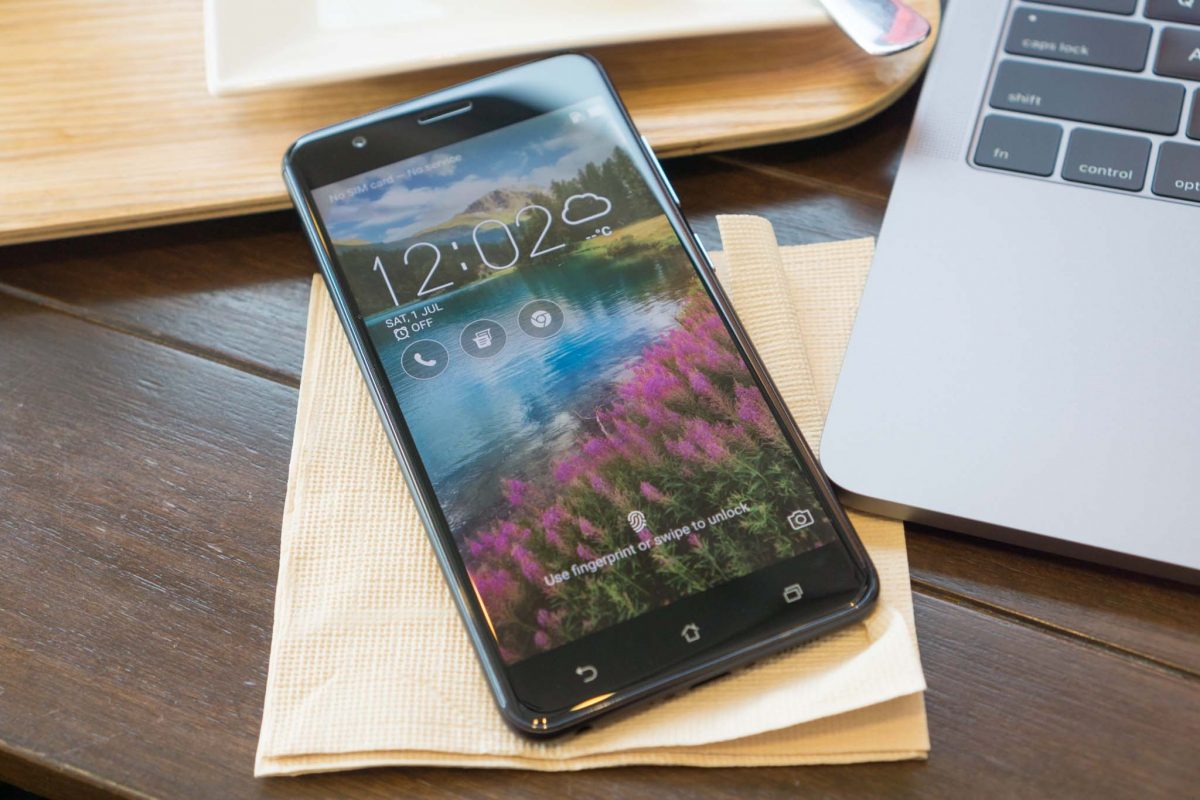 For those familiar with the older ZenFone Zoom, the new ZenFone Zoom S is fortunately more conventionally shaped. In fact, the ZenFone Zoom S is now quite nondescript, and I mean that in a good way. Its simple, understated design actually appeals better to me.

The front of the phone is covered by a 2.5D slab of glass, which means that the glass edges are curved around the sides. The usual capacitive buttons are at the bottom. They are, unfortunately, not backlit. The display itself is a very vibrant, 5.5-inch, Full HD AMOLED screen. There are no brand markings. The only ASUS branding appears on the back of the phone, and it’s subtle. 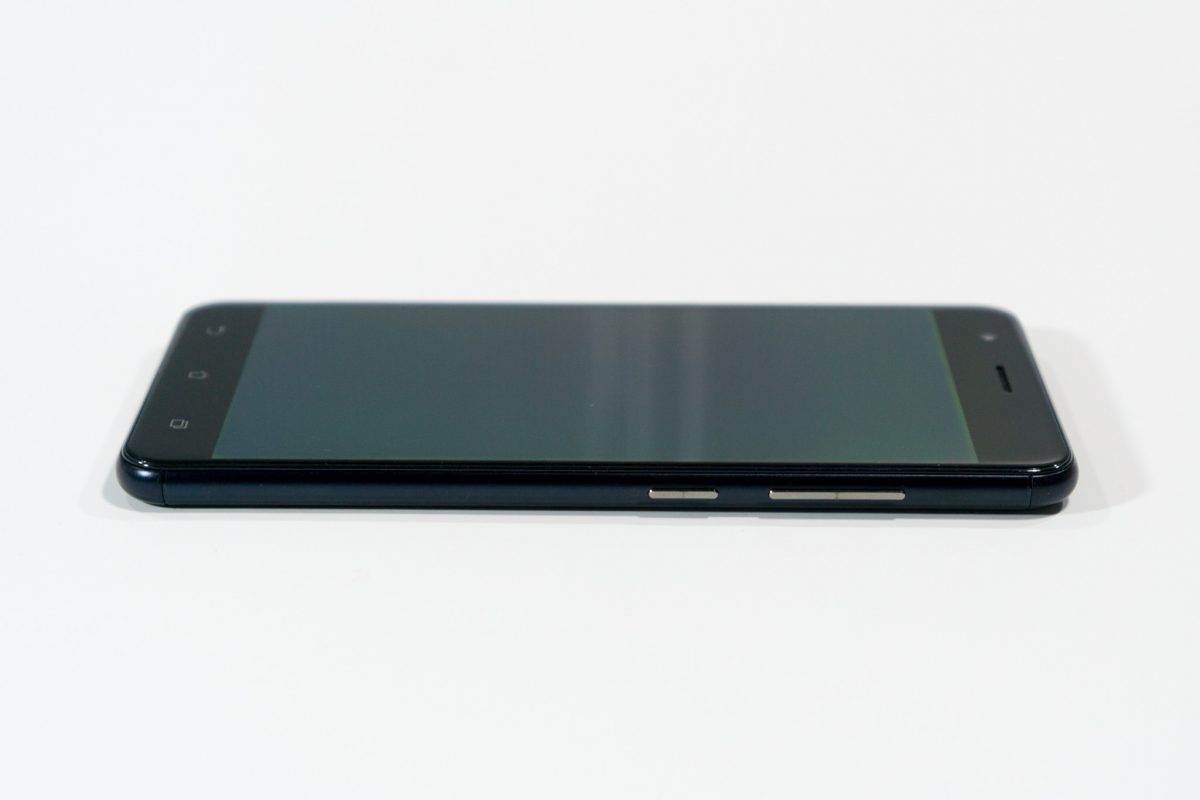 The sides of the ZenFone Zoom S are slightly curved, which makes the phone comfortable to hold. On the right side, you’ll find the volume rocker and power button. The buttons are made of metal with a subtle texture that feels more premium than the rest of the body. The buttons’ tactile feedback, when you press them, feels very good too.

The left side is featureless, save for the SIM card tray which accommodates two nano-SIM cards. You can also insert a microSD card in-place of the second nano-SIM. 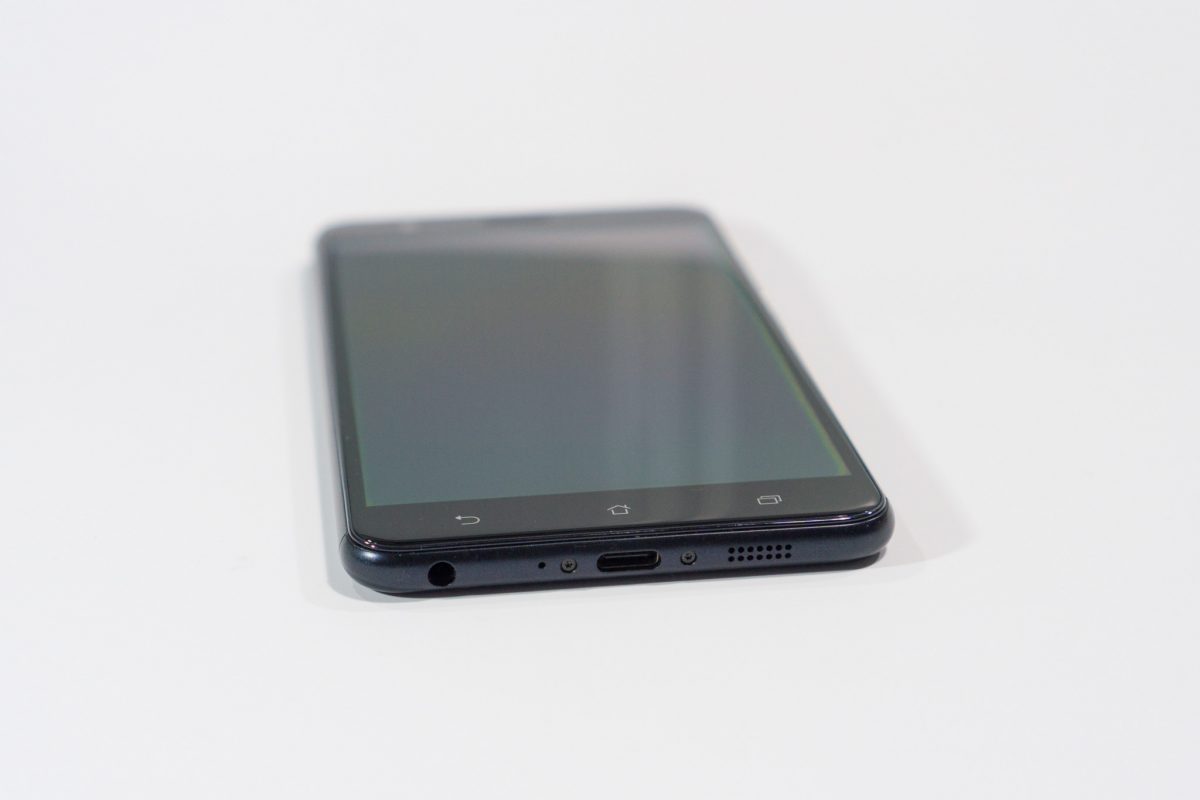 At the bottom, there is a 3.5 mm audio jack and a USB-C port. By this time, USB-C should be quite well accepted, and perhaps even preferred over Micro-USB ports. It’s a good thing that ASUS continues to offer the 3.5 mm audio jack, and as a matter of personal preference, I like it located on the bottom of the phone. There is also a visible loudspeaker grill at the bottom.

On the back, you’ll find the dual camera setup at the top, with flash and laser focus mechanism below them. There’s also a fingerprint sensor on the back. The fingerprint sensor works well, and by now it is an oft expected method for unlocking smartphones. 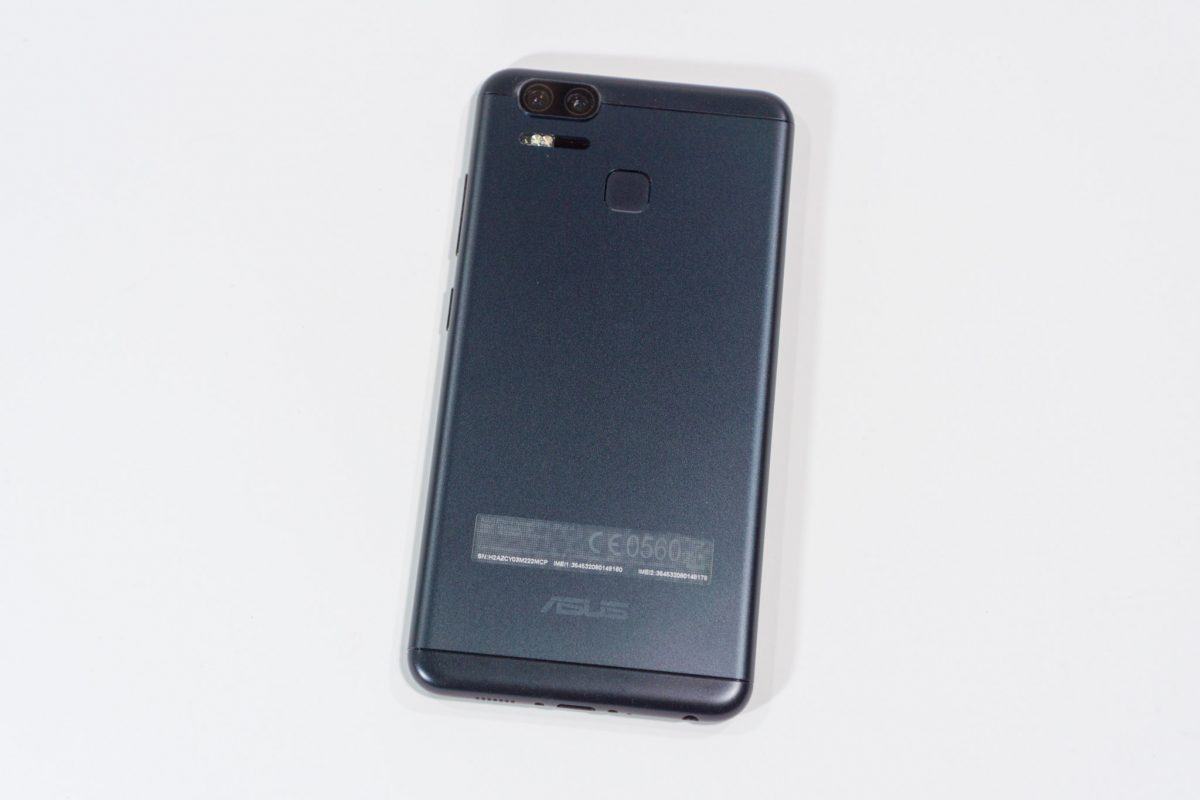 The star feature of the ZenFone Zoom S is no doubt that dual camera on the back. In terms of specifications, both sensors have 12-megapixel resolution, with dual-pixel phase detection autofocus (in addition to laser focus mentioned above).

Under the hood, the ZenFone Zoom S is powered by a Qualcomm Snapdragon 625 processor, a sure sign that it doesn’t belong in the high-end premium smartphone category. However, the processor, with 4 GB of RAM, is completely adequate for all casual smartphone use. There’s 32, 64 or 128 GB of flash storage options available. Both nano-SIM supports 4G LTE.

A big disappointment for me is the lack of 5 GHz band Wi-Fi support. The ZenFone Zoom S supports only 802.11 b/g/n on the 2.4 GHz band. There’s also no NFC support. There is Bluetooth 4.2. GPS, A-GPS, GLONASS and BDSS support is available for navigation.

The huge 5,000 mAh battery is impressive, particularly considering that the ZenFone Zoom S doesn’t even feel bulky at all, measuring 154.3 x 77 x 7.99 mm and weighing 170 grams. The enormous battery easily lets the ZenFone Zoom S run at least two days without worry. If, like me, you constantly worry about battery levels on your smartphone, the ZenFone Zoom S will make that no more.

Some people may not like ZenUI, and while I too prefer the pure Android experience, I think ZenUI doesn’t too heavily skin Android into another beast. ASUS tries to provide many useful applications, much like what other manufacturers would do, but you can always opt to use the stock Android apps, which are also preloaded, instead.

The camera experience on the ZenFone Zoom S is excellent. Focus and capture is extremely quick. There are plenty of controls, including a full-manual camera mode.

Let’s take a closer look at the camera quality on the ZenFone Zoom S. I have a Google Pixel XL, the one that scored the best by DxOMark last year (now beaten by the HTC U11). How does the ZenFone Zoom S compare? Well, let’s just casually compare photos taken from the two phones.

I won’t say which phones took which photos for now. I’ll reveal that later. For now, just take a look at some of these shots and you decide for yourself which ones are better. I also understand these are not the full-resolution shots, but well, just make do for this casual comparison, okay?

I’ll start off with some outdoor shots. The above street shot was taken in bright daylight. The next pair is taken in a neighbourhood park.

The outdoor shots from both smartphones are pretty good, and I would say comparable, at least from the perspective of a casual smartphone photographer.

The next pair of photos are taken indoors under standard office lighting conditions, which means the room is well-lit.

Generally all the well-lit photos, between the two smartphones, are comparable. The challenge is with poor-lit conditions, and it’s obvious in the following photos.

The next pair of photos are taken in an office without lights turned on, but some indirect morning sunlight is coming in through the windows (not facing the sun).

The above lighting condition is likely the furthest one would typically expect to take photos in under normal circumstances.

The next two pairs of photos are taken in really dark conditions. There were no lights turned on at all in the somewhat enclosed room, but it’s not total darkness because I allowed some outside artificial light to enter the room.

The next pair is in a different room with similar lighting conditions. Some LED status indicators are in the centre of the photos.

The above two pairs of photos are really in unusually dark conditions that most people typically don’t expect to take photos in.

Looking at all the photos again, which one in each pair do you prefer?

Are you ready to find out which smartphone took which photo?

If for some reason you have a need to take photos in very dark environments, the ZenFone Zoom S will likely work better than most other smartphones.

In the box, the ASUS ZenFone Zoom S comes with a USB-C charging cable, USB charger, USB-C adapter, earphones with a variety of silicon tips, SIM eject tool, and a clear soft bumper. The inclusion of the soft bumper is nice, so you can immediately protect the brand new phone out of the box. 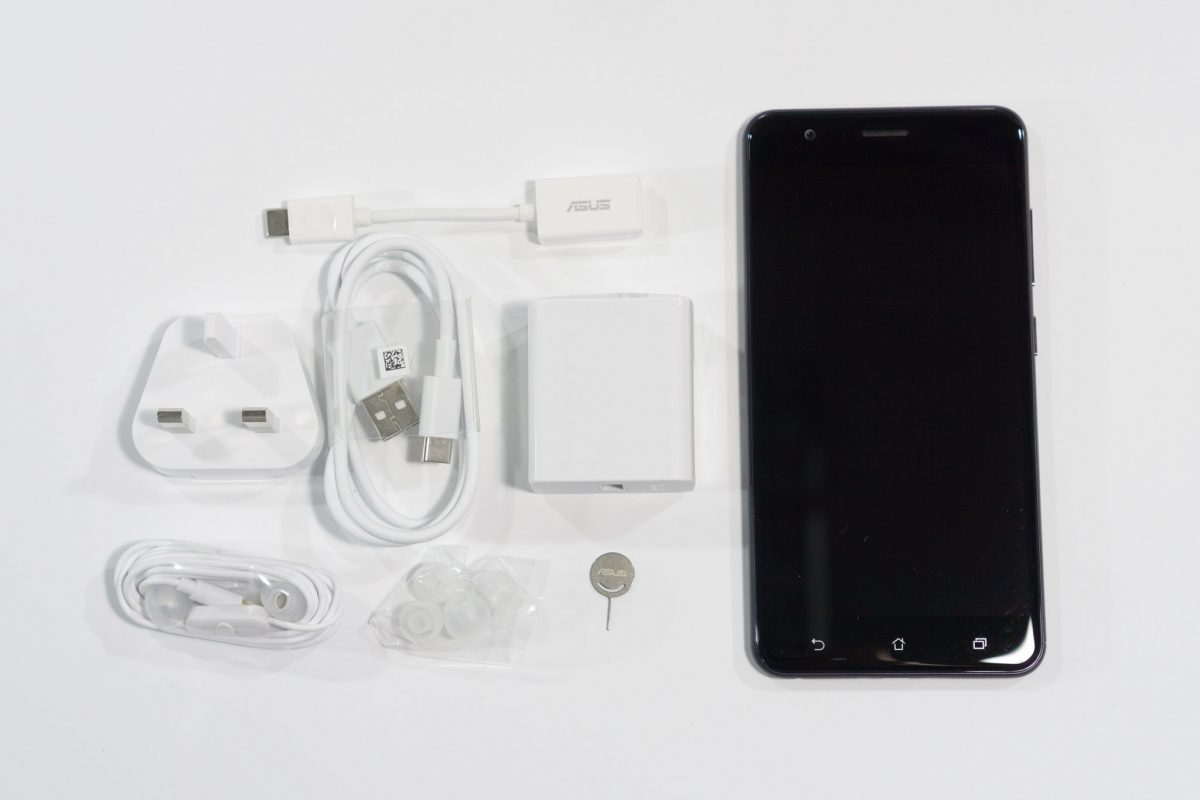 The ASUS ZenFone Zoom S retails for S$678 for the version with 4 GB RAM and 64 GB flash storage. Navy Black (as reviewed here) and Rose Gold colour options are available in Singapore.