By now, you should probably already have gotten yourself updated about what’s legit and what’s fake.

One particular joke, however, has caught my attention in a different way. It’s Google’s reversed website: com.google. Yes, you read the right, it’s com.google, not google.com. Everything on the webpage is rendered backwards in the com.google version of Google’s search page.

The backward rendering is gimmicky. It’s the domain name that led me to dig out more information. In the old days, the Internet only had TLDs like .com, .org, .net, and a bunch of other country-level TLDs. Then, there were fancy stuffs like .sex, .biz, etc. But .google too? 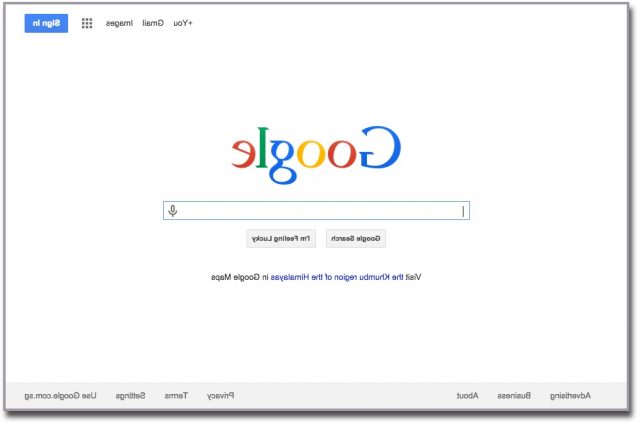 So it seems that Google has had this since last year. They went live in November 2014, according to this article in The Register. More interestingly, while I’ve heard that Google has plans to get into the domain registrar business, I didn’t realise that it was on such a big scale.

For networking folks, this additional April Fools’ thingy could be of interest to you. Ever since I read about the IETF’s RFC 1149 Standard for the transmission of IP datagrams on avian carriers and RFC 2324 Hyper Text Coffee Pot Control Protocol (HTCPCP/1.0) and RFC 1149, I’ve always been on the looking forward to the latest, annual, update to the RFC publications.

This year, the RFC put out RFC 7511 Scenic Routing for IPv6. Not very funny. At least not as the previous two.