3D printers are really nice. The troublesome thing about them is that you need to create your 3D design model in a computer, saved into STL format and then sent to the printer. What if you just wanted to sketch something directly into thin air, without using any software or computer?

This is exactly what the 3Doodler tries to do. It’s like a pen, or a glue gun, but it squirts out liquid plastic that solidifies instantly as you draw with it.

3Doodler’s 3D printing pen is pretty much the easiest and most fun way to get started with printing 3D objects. Of course, there’s still a little bit of learning involved, such as in holding and using the pen, and particularly about how the various plastic materials work. However, you don’t have to figure out how to use 3D modelling software which, to be honest, can be a lot more frustrating. 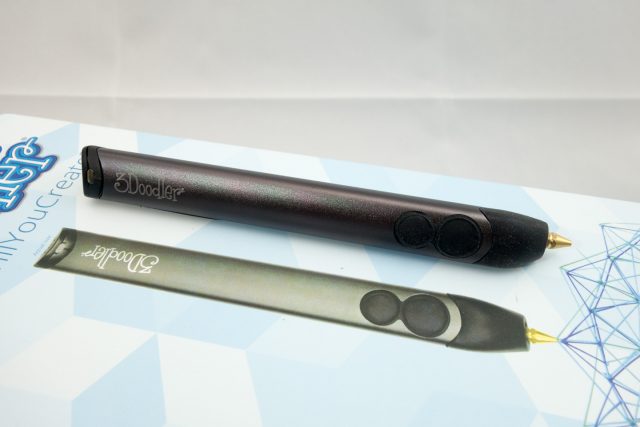 The 3Doodler, as you can see in the photo, has about the girth of a whiteboard marker pen. The metal tip, at the bottom, is here the molten plastic is squirted out from. It’s very hot, of course, so while you’re using the pen, you need to be pretty careful where you fingers are, and where you set the pen down on.

This 3D printing pen handles two types of plastic: ABS and PLA. WobbleWorks also added flexy plastic, which as far as the pen is concerned, is treated like ABS. The main difference in the handling of ABS vs PLS is the heat setting on the pen. ABS requires higher heat than PLA. The power switch on the pen allows you to choose low or high heat, corresponding to the temperature required for PLA and ABS respectively. Note that “low” is still about 200°C. 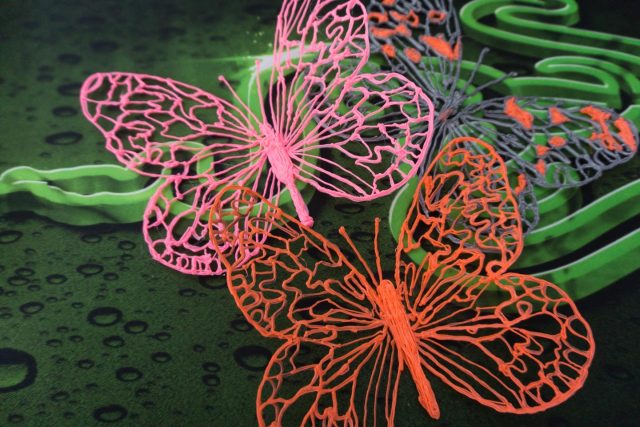 Creating freehand 3D objects takes some practice, but once you’ve mastered some basic skills, you’ll have lots of fun.

For beginners, like myself, it’s much easier to draw with a stencil as a guide, rather than truly doodling freehand. WoobleWorks’ website provides a number of drawing stencils that can help get newbies started on their projects. The above butterflies, for example, were created with the help of their stencil.