3D printing has been all the rage for some time now. The challenge for most casual users, however, in trying to produce their 3D masterpieces is the need to create their model in software. It’s a steep learning curve. But what if you could simply draw out your models with a pen in thin air? 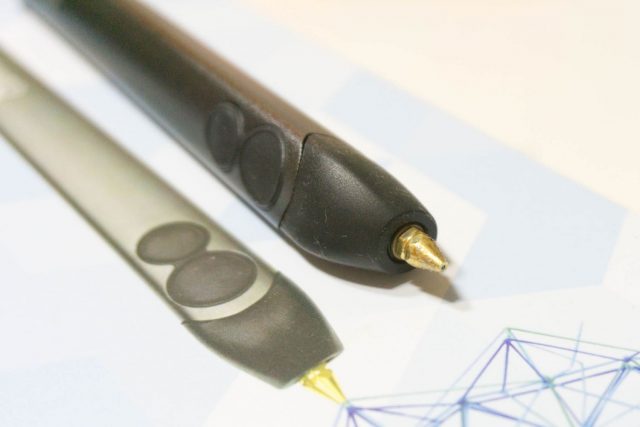 This is exactly what the 3Doodler does. There is no software to learn or use, and there isn’t even the need for a computer. It’s a pen. It squirts out hot plastic like a glue gun, which instantly solidifies as you draw with it. The plastic even follows the pen when you lift it off a surface, essentially drawing into thin air. It’s almost like magic.

3Doodler’s 3D printing pen is pretty much the easiest and most fun way to get started with printing 3D objects. Of course, there’s still a little bit of learning involved, such as in holding and using the pen, and particularly about how the various plastic materials work. However, you don’t have to figure out how to use 3D modelling software which, to be honest, can be a lot more frustrating especially when you’ve never used them before. 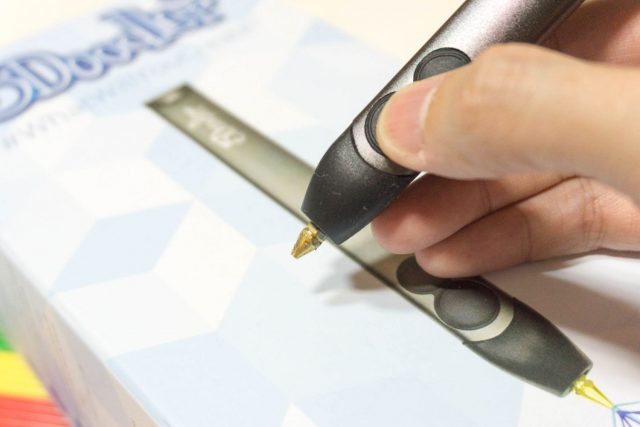 The 3Doodler, as you can see in the photo, has about the girth of a whiteboard marker pen. The metal tip, at the bottom, is here the molten plastic is squirted out from. It’s very hot, of course, so while you’re using the pen, you need to be pretty careful where you fingers are, and where you set the pen down on.

The two buttons near the tip control the extrusion speed. The lower button for faster speed, and upper button for slower speed. This allows you better control of the plastic extrusion. Plastic filament is fed through the top of the pen.

The pen does require a 5 VDC power supply, included in the box. It runs at 1.2A, or about 6W, which seems like something that could be powered from USB. They do have a battery pack accessory in the pipeline so you can really doodle away without being tethered to a power source. Incidentally, 6W might not sound like a lot, but the pen does put out some serious heat to melt plastic. 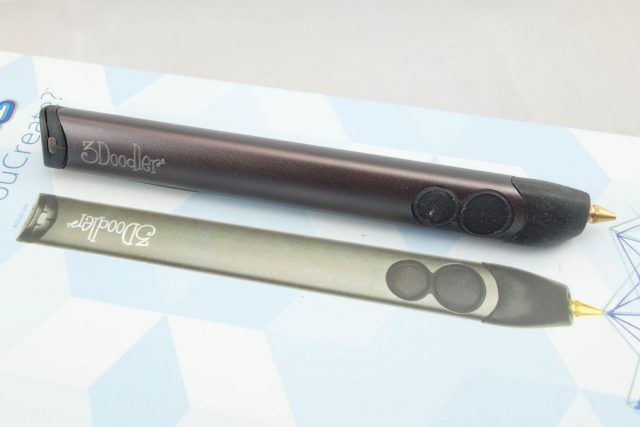 This 3D printing pen handles two types of plastic: ABS and PLA. WobbleWorks also added flexy plastic, which as far as the pen is concerned, is treated like ABS. The main difference in the handling of ABS vs PLA is the heat setting on the pen. ABS requires higher heat than PLA. 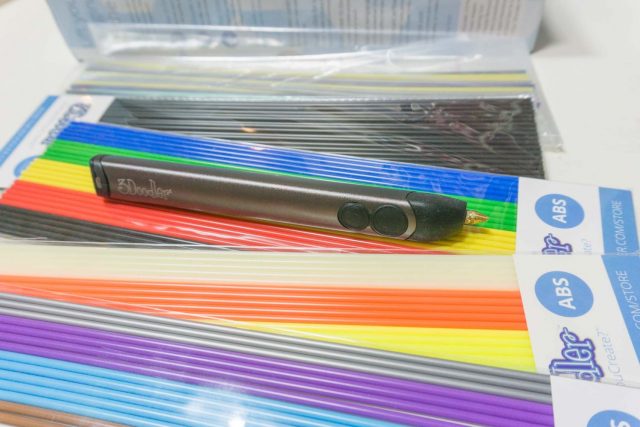 The power switch on the side of the pen, near the top, allows you to choose low or high heat, corresponding to the temperature required for PLA and ABS respectively. Note that “low” is still about 200°C. So it’s pretty hot, something you still need to be careful with.

You’ll need to read up about the different properties of ABS vs PLA to determine which plastic is more suitable for your printing project.

A bunch of plastic is included in the box to help you get started. Once you run out of them, you can buy more from WobbleWorks. Plastic costs about US$9.99 for 25 strands.

Creating freehand 3D objects takes some practice, but once you’ve mastered some basic skills, you’ll have lots of fun. It’s tricky because you can’t just pause while drawing, at least not without stopping the plastic flow, and then, that requires at least some coordination on your part to start and stop the plastic flow at the right time. 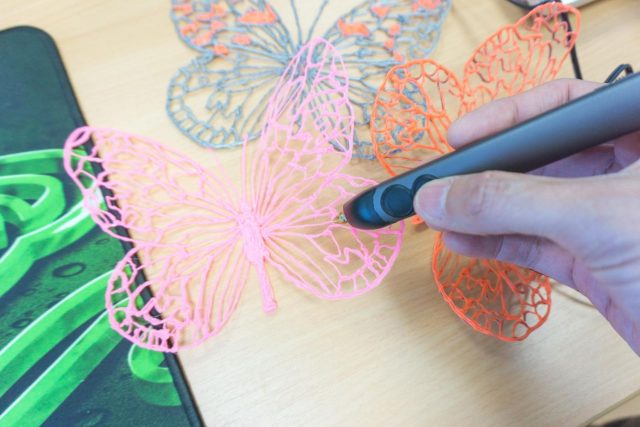 WoobleWorks’ website provides a number of drawing stencils that can help newbies get started on their projects. The above butterflies, for example, were created with the help of their stencil. Print out the stencil on paper, using a standard inkjet or laser printer of course, then trace the stencil with the 3Doodler pen.

For beginners, like myself, it’s much easier to draw with a stencil as a guide, rather than truly doodling freehand. Following a stencil, for a start, means you don’t have to think so much about where the pen needs to move. 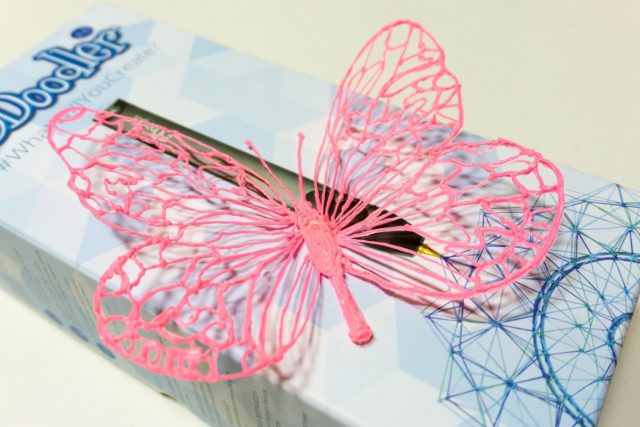 The 3Doodler 3D printing pen retails for US$99 from WobbleWorks. Their online store also sells a number of other accessories, like a stand, nozzle set, and foot pedal for controlling the plastic flow.

The second generation 3Doodler 3D printing pen brings very affordable, consumer-friendly, convenient 3D printing to the masses. With no software to learn, you can get started right away doodling your creation even if you’ve never tried 3D printing before.