Huawei has now got quite a bit of my attention because, notably, of the Nexus 6P they made in partnership with Google, but no less also because their other flagships like the Mate 7 and Mate S were pretty impressive too. Their latest flagship is the Mate 8, which I had the opportunity to lay my hands on. 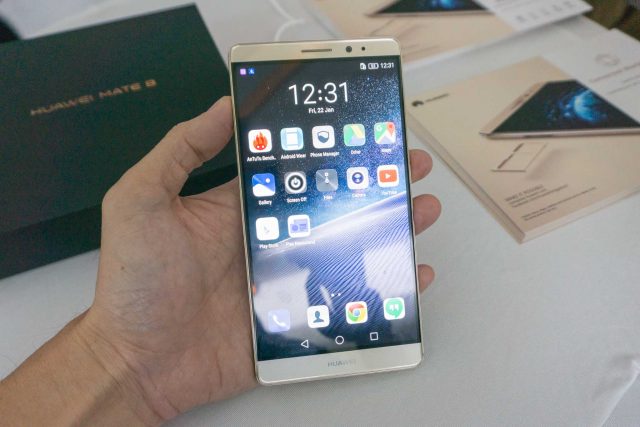 In the hand, the Mate 8 feels really good, although perhaps a little too wide. The all metal build gives it nice quality touch and solid rigidity. The sides are flat, with a brushed metal finish, and subtle chamfered edges. In short, it both looks and feels premium.

Other features that remain unchanged in the Mate 8 include the Full HD 1920×1080 resolution IPS display and fingerprint sensor on the back. The battery is just a tad smaller, but still mighty big at 4000 mAh. The Mate 8 is a unibody design, so the battery is non-removable, but that should be quite alright given its size. It’s 2016, and some people may find Full HD resolution to be sort of yesteryear. I, unfortunately, have to agree, not so much because QHD is getting common place, but mainly because the Mate 8’s 6-inch display could perhaps benefit a little from the added pixels, and it’s generous battery capacity does support the added power draw from a higher resolution display.

The Mate 8 and Mate 7 may have a very similar form factor, and they both actually look quite similar, but there are a few key differences in the physical design that helps distinguish one from the other. 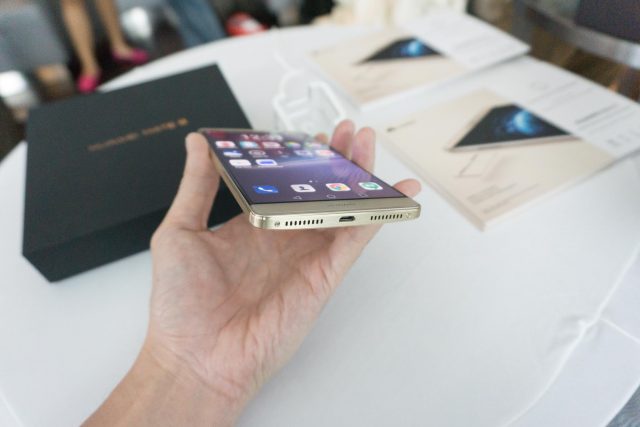 The speaker, for example, is now on the bottom of the Mate 8, with a pair of grills on both sides of the Micro-USB port. The bottom firing speaker make for better sound quality.

The big improvement in the Mate 8 is the new 16 MP rear camera, with OIS and f/2.0 aperture. The front camera is 8 MP, with f/2.4 aperture, the same as the one on the Nexus 6P. I can’t comment about the image quality since I’ve not had the opportunity to really try them out yet. I can tell you, though, that the Nexus 6P’s front camera takes good selfies, so I don’t set why the Mate 8 shouldn’t be quite similar with its front camera.

If you are familiar with the Mate 7, you’ll notice that the Mate 8’s back is another place that looks quite different. Squarish camera lens and fingerprint sensor have now become round. The back, incidentally, is also slightly curved, thus making the Mate 8 feel slightly slimmer than the Mate 7, even though they are the same thickness at the thickest point. I’m personally not a fan of curved backs, but perhaps for a big phablet, at 80.6 mm wide, anything that helps make it feel less unwieldy is good to have.

Under the hood, the Mate 8 gets Huawei’s own HiSilicon Kirin 950, their most powerful processor currently. It’s an octa-core processor with 4x Cortex A53 clock at 1.8GHz, 4x Cortex A72 clocked at 2.3GHz. There’s 3 or 4 GB of LPDDR4 RAM, and 32, 64 or 128 GB of flash, depending on model. It’s a dual-SIM capable, using nano-SIMs, but allowing you the flexibility to use a micro-SD in place of the second SIM for removable storage. So whether you like having a secondary SIM card or removable storage, the Mate 8 has you covered, although you can’t have both at the same time.

The Mate 8 ships with Android 6.0 Marshmallow, but skinned with Huawei’s EmotionUI 4.0. Although the software seems to work well, I don’t like how the launcher tries to adopt an iOS-ish style. No doubt some people might be more receptive to Android customisations than I am, so to be fair, I couldn’t say that what EmotionUI has done is necessarily bad.

Huawei’s latest flagship Mate 8 had made some small design improvements. It’s a huge 6-inch phablet that retains its premium build quality while updating its specifications to current norms and expectations. We should expect the Mate 8 to arrive in Singapore soon, starting with online sale through Lazada.