The notebook tends to feel a bit warm too. I thought that, perhaps, there was too much dust clogged up inside the notebook, and as a result that has impaired its cooling efficiency. With the heat building up, the fan has to work harder, and thus drain the battery faster. It sounds like a reasonable explanation.

So one fine day, I decided I’ll do some housekeeping. Yup, open up the chassis and blow out the dust. I have a P5 Pentalobe Screwdriver bought a few years ago just for the job. I’ve opened up Apple notebooks before, so this was not an unfamiliar task. I quickly got the bottom cover off, and here’s what I saw.

The battery packs are quite bloated. Normally, the sides ought to be quite flat, but you can see it’s bloated in these photos.

Now, I realised something that I ought to have noticed much earlier. My Retina MacBook Pro hasn’t seemed to sit very flat on my desk. There seemed to be some instability. I hadn’t though much about it earlier because, you see, I use the notebook on a huge Razer mouse mat. The mat itself isn’t a hard surface.

I suppose the signs of battery bloat were there. When opening up the cover, I had also noticed it was every so ready to pop out. It shouldn’t be. It appears the cover has been pushed out of the internal clips that ought to have held it in place, even before any screws are attached.

The battery packs don’t look so horribly bloated like some you might have seen on the Internet. But the bloat is there. The hardware itself doesn’t think the batteries are bad. Mac OS X reports the very still in good health, though its maximum charge has been deteriorating faster than I’m expecting. 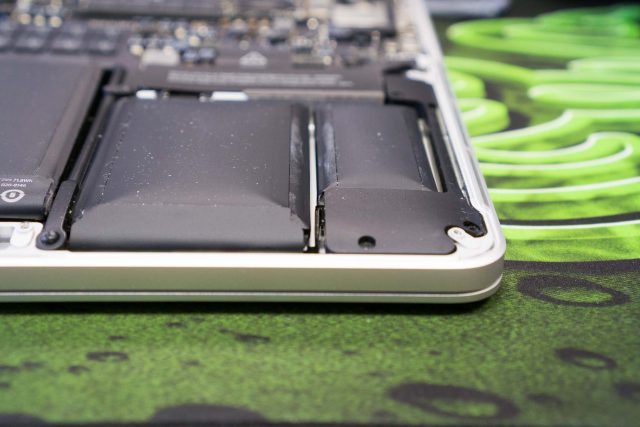 Recalling all the stories about batteries catching fire or exploding, I think this is a serious situation I have in my hands. I supervised a final Time Machine backup, and scheduled to go visit a Apple service centre later that day. My unpleasant experience at A.Lab shall be the subject of another post.

I’m not sure if it’s because the battery being glued to the top case makes it necessary to change the case, or that removing the battery had inadvertently caused the top case to get damaged, or perhaps the top case was already damaged by the bloated battery. I suppose that’s all not important, what matters is that I have more new parts.

The new battery isn’t terribly new though. It was manufactured in December last year, so it’s already some eight months old. But I shouldn’t complain. It’s going to be better than whatever I had before, even if that battery had not bloated up.