We’ve holidayed in Bangkok numerous times, and we were going to be headed there again earlier this year. But this time we added a little twist to our itinerary. It wouldn’t just be Bangkok. We would go to Khao Yai, a rather unique, idyllic, getaway about 3 hours drive from Bangkok.

The Khao Yai region includes the Khao Yai National Park, a UNESCO World Heritage Site, which spreads across four provinces of Thailand. Since most of the family aren’t into trekking mountains, the highest peak of which stands at 1,351 metres above sea level, our itinerary didn’t actually include getting into the national park itself. There are still plenty of other things to see and do at Khao Yai though!

We arrived at Khao Yai late night, and we planned to stay two additional nights. Our accommodations were at the very nice Atta Lakeside Resort. We had a 102 square-metre two-bedroom suite, with two bathrooms, a living area and sort of kitchenette. Here’s one of the bedrooms.

In the morning, we woke up to this beautiful lake view.

It’s even more beautiful at sunset!

Here’s a wider-angle shot from the suite’s enormous balcony. That’s the Khao Yai National Park you see in the distance.

We had good strolls around the resort grounds.

Breakfast was at the resort. There’s little of anything else to do in the resort. There’s plenty to see and do in the Khao Yai area, but everything is some distance away, so it is absolutely necessary to secure some form of transportation. Either you rent a car, or hire a driver with a vehicle for the whole day to take you around. Don’t expect to be able to hail a cab.

We visited a few places, like this vineyard. We went to two, actually, but the second one was just a quick “drop in” to look-see. We had a tour at the first place, GranMonte Vineyard and Winery.

They grow grapes, and they make wine there in Khao Yai. GranMonte is a family-owned vineyeard sitting on approximately 40 acres of land at 350 metres above sea level. The area has the right climate for growing grapes.

GranMonte produces about 90,000 bottles of wine annually, and they’ve picked up quite a number of prestigious awards. The owner’s daughter is an oenologist, who studied in Australia, and has professional experience in Brazil, Australia, South Africa, Portugal and France.

You can go for their wine tasting, which we did. The kids were provided with non-alcoholic drinks.

There’s also a shop selling some foods, apart from wine, as well as an excellent restaurant.

We had a lunch booking at the restaurant. Food was fantastic. The chef is none other than the owner’s wife. This is a restaurant you could legitimately go all out of the way to enjoy a sumptuous lunch of dinner, not the kind you settle for a quick bite after a hot and tiring farm tour.

Just looking at the food makes my mouth water. There’s so much to eat, and you haven’t yet seen the appetiser and dessert. Needless to say we had a really filling lunch.

The other place we dropped in for a quick look was the Khao Yai Winery.

After lunch, we found ourselves teleported to Italy. No, actually we just drove. Not Italy, but this Primo Piazza looks like a really legitimate Italian piazza. It doesn’t look at all like Thailand, does it?

In fact, even if you try to look beyond the buildings, at the far and beyond, the scenery is beautiful, and it won’t give you a hint that you’re actually in Thailand.

One of the fun activities to do at Primo Piazza, other than to eat ice cream on that really, very, hot day, is to feed Alpacas. You’ll have to buy the reasonably priced hay. Kids will probably love this.

It’s not sunflower season, but there are sunflowers around the Primo Plaza for you to admire and take pictures with. At the right times of the year, there are huge blooming sunflower fields around the Khao Yai area which would make for a really spectacular view.

Dinner was at the Chocolate Factory. It’s a restaurant chain, not quite a factory per se, much like the Cheesecake Factory in the U.S. There are many branches, of course, and we went to the one at Khao Yai. They have a cafe and chocolate shop in one building, and a full-service restaurant in an adjacent building.

The restaurant serves regular western food, items like pasta, sausages, and such. Food is good. 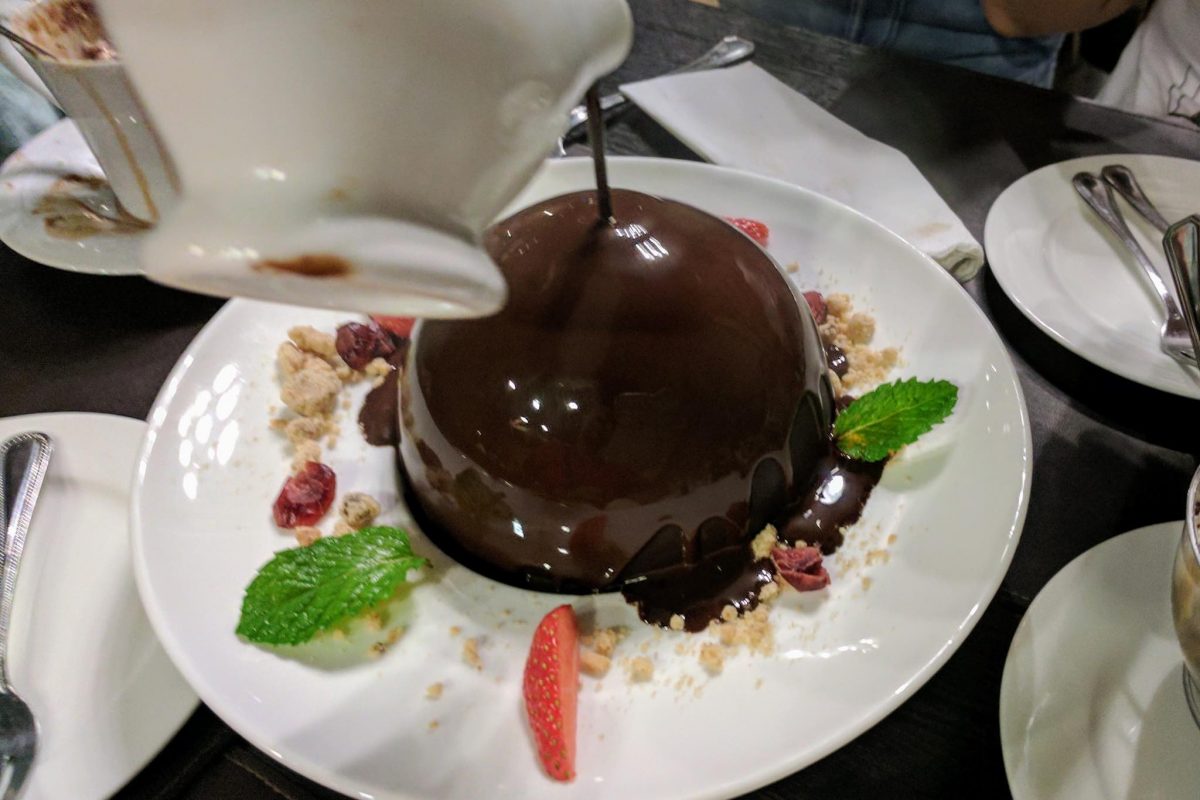 The next day, after breakfast and a nice stroll around the beautiful lake on the resort grounds, we headed to a local farm, Farm ChokChai. It’s a working cow farm, where they milk the cows to manufacture a variety of milk products.

Coming to this farm feels like a school excursion. In fact, there was in fact an excursion from a local school at the farm at that time, with lots of chatty students running around enjoying, presumably, a school day not in the classroom.

Apart from watching and learning to milk a cow, peeking at the milk manufacturing line, and tasting ice cream made right there, we also got some time at a sort of amusement centre. You could ride ATVs, ride on ponies, go around in a horse carriage, or play a number of games. There’s also a good old cowboy show.

The tour runs on a fixed schedule, so unfortunately you can’t hang around longer to play more games or go on more ATV rides. When time is up, you go. The whole tour runs about 3 hours.

Lunch was at another cool place. No, it was really hot. The weather was mostly hot, though there were brief downpours. But this was a nice place, Midwinter Green, a fine dining restaurant set in what might pass off as some sort of an European castle. Like how it was with Primo Piazza, Midwinter Green looks like the place it wants to be.

Decor inside the restaurant was very nice.

There’s an outdoor alfresco dining area, but in this hot weather, there was no soul in sight. Perhaps in the evenings, there could be dinners sitting under the stars. They could host quite a sizeable party with both the indoor and alfresco areas together.

Food was excellent. Mostly western fare. Alright, there is some Thai, and perhaps some fusion mix. 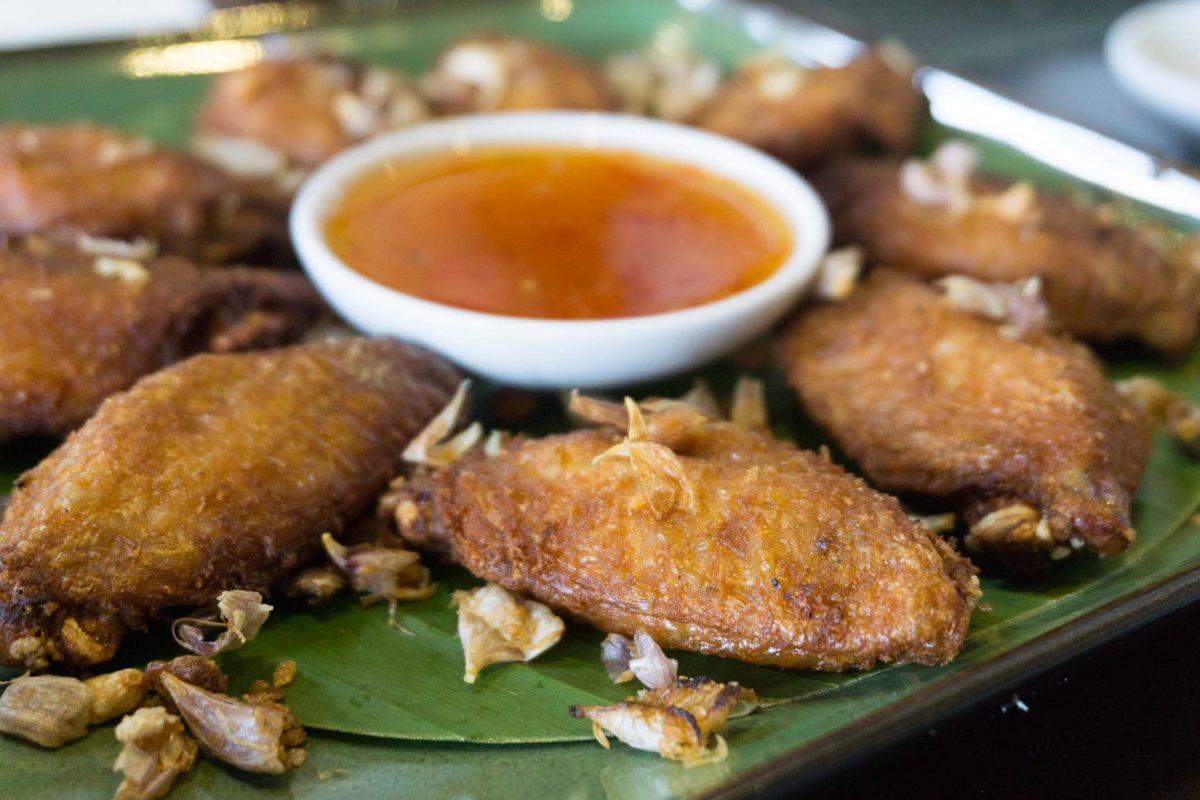 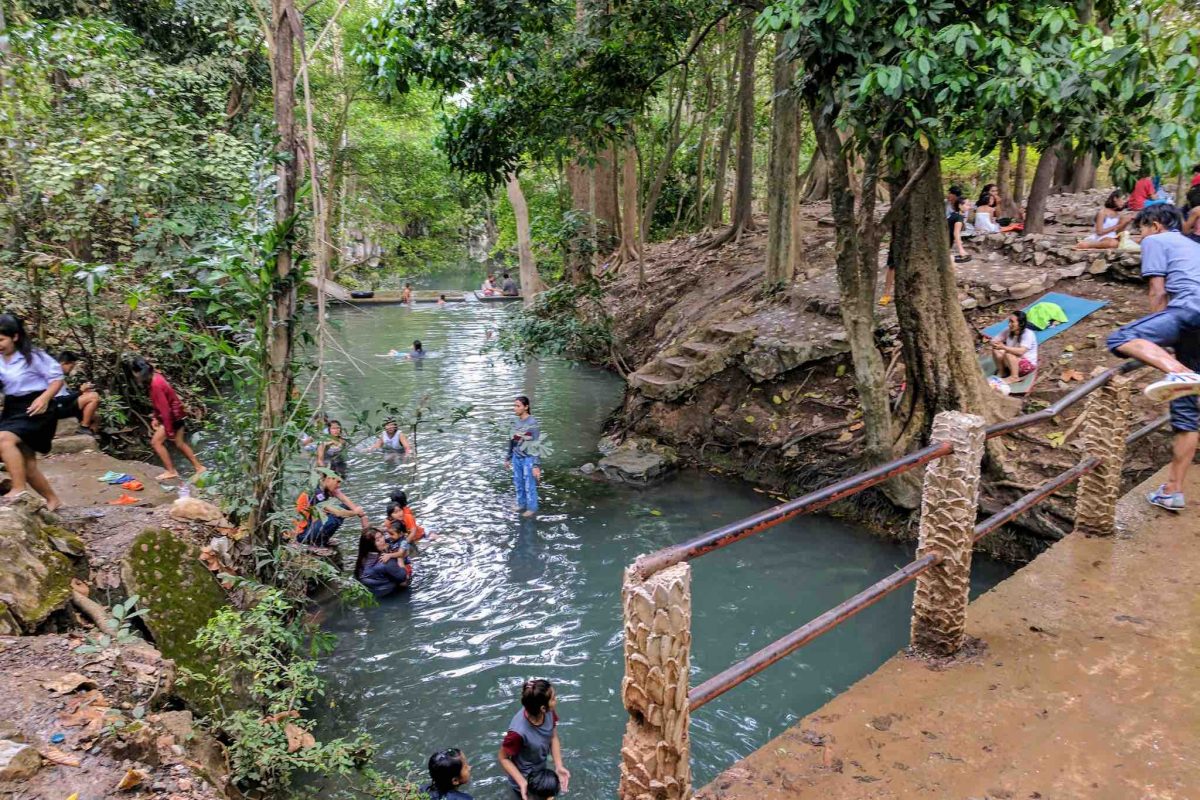 We dropped by Ban Tha Chang spring, which our driver described as a nice place the locals go to cool off on a hot day. There’s quite a crowd of locals there, no foreigners in sight though. We did go on a quick walk-around.

If you seek more fun-filled thrilling experience, there’s Khao Yai’s Scenical World. It’s a theme park. Or perhaps three parks rolled into one. It’s a really quiet place, like as if no one knows it’s there. It was practically a dead town when we visited.

Scenical World has three themed areas: Splash is a water park with slides, tubes, wave pool and other  water fun; Excite has the adrenaline pumping stuff like roller coasters; and finally Kids, for the younger ones with milder sort of amusement park rides.

There are several more things that would be worth to visit. There are lavender and sunflower fields, for example. Unfortunately it wasn’t the right time for us, all we got to see were withering sunflowers. There a cutesy place to stay at The Shire. You’ll stay in fascinating hobbit houses. If Primo Piazza didn’t have enough Italy, there’s also Palio Village. For foodies, The Witches Brew Restaurant will be interesting. For farm lovers, there’s Jim Thompson farm.

As mentioned earlier, you would need your own transportation to get around. Nothing’s “near” to each other. The scenery, below, was photographed from the van as we were headed to Bangkok.

Maybe, another time, we might explore the national park. The #2 had conquered Gunung Lambak with me last year, perhaps he might convince the rest to try some light forest walkabout.

Khao Yai looks to be a rather interesting, quieter, destination to go in Thailand, and can be an easy add-on itinerary to shopping in Bangkok. It’s a picturesque place.

8 thoughts on “Vacationing at Khao Yai”