Netgear launched their Orbi Wi-Fi System in September 2016, making them about the first mainstream manufacturer of consumer networking gear to enter the mesh Wi-Fi arena. The RBK50, as the model is known, continues to set a high bar even today for new Wi-Fi systems to beat, both in terms of coverage strength and speed.

The Orbi RBK50 comes as a two device kit, so you are all set to get your home blanketed with mesh Wi-Fi from the get-go. Although both devices look almost identical, one is designated as the router, which means it’s the primary unit, whereas the other is the satellite. They are distinguished visually by the port connections on the back, as well as the colour of the top panel. 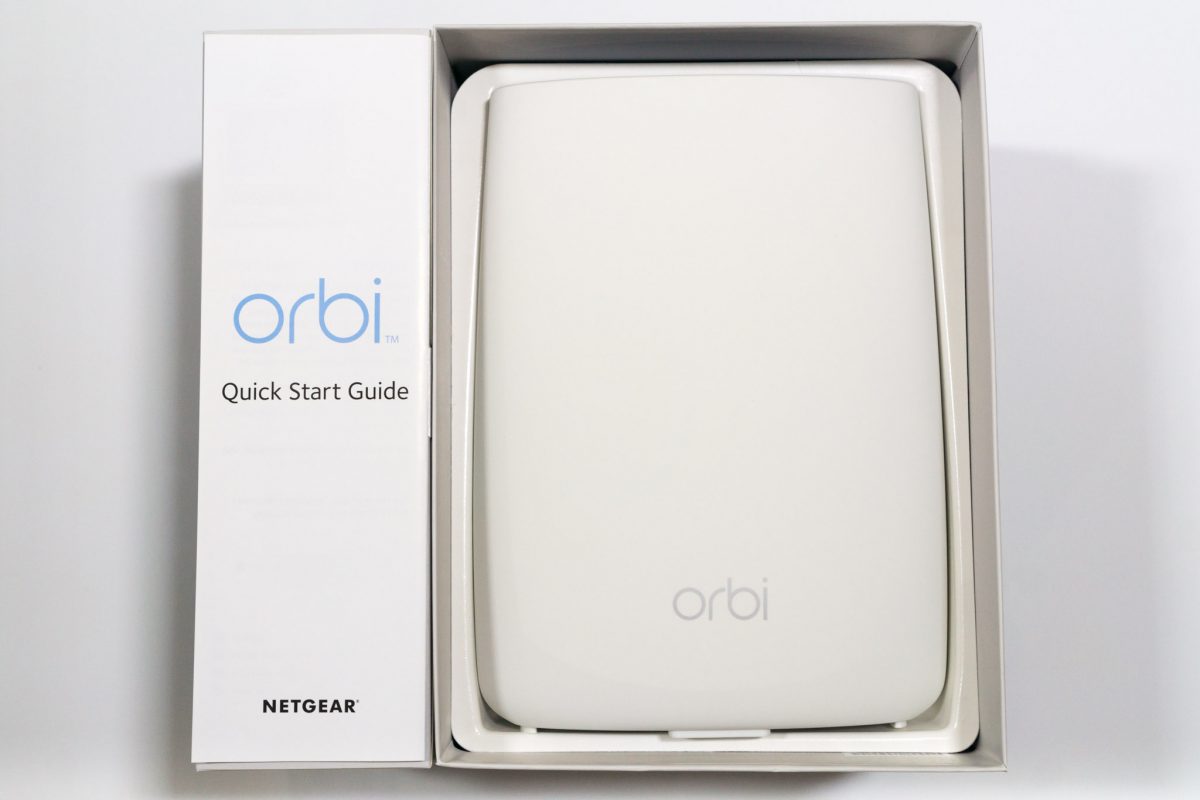 While the overall design of the Orbi looks pleasant, I was surprised at its sheer size. It’s unwieldy, particularly when you compare with the petite looking TP-Link Deco M5 or Google Wifi devices. 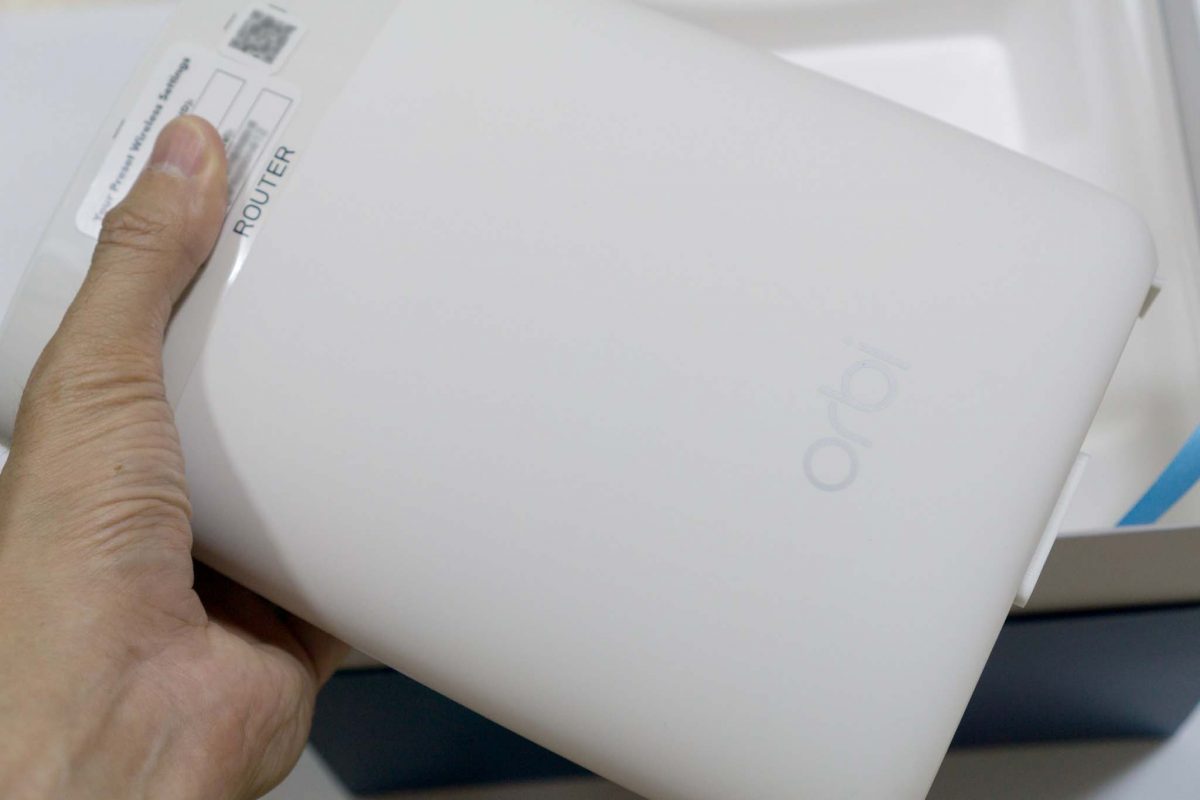 Fortunately, the tall oval-profile cylinder device would not be considered an eye-sore in the living room, though it certainly will arouse suspicion as a technology gadget. The hefty size, at 8 x 6.4 x 3.1 inches (H x W x D), could well encapsulate large powerful internal antennas, which would thankfully be far better than having ugly external antennas. Tall as it may be, the Orbi has a relatively small footprint, so you can easily sit it on a shallow shelf.

The top of the device has a ventilation opening around the edge, and from within a ring of LED light is emitted to indicate status. The glow effect is quite cool. Unfortunately, the lights turn off once the device is up and running properly. The only indication that the device is actually working comes down to a diminutive power LED indicator tucked in the back panel. I know some people prefer their router not emit distracting lights, but I think this should at least be a configurable option. 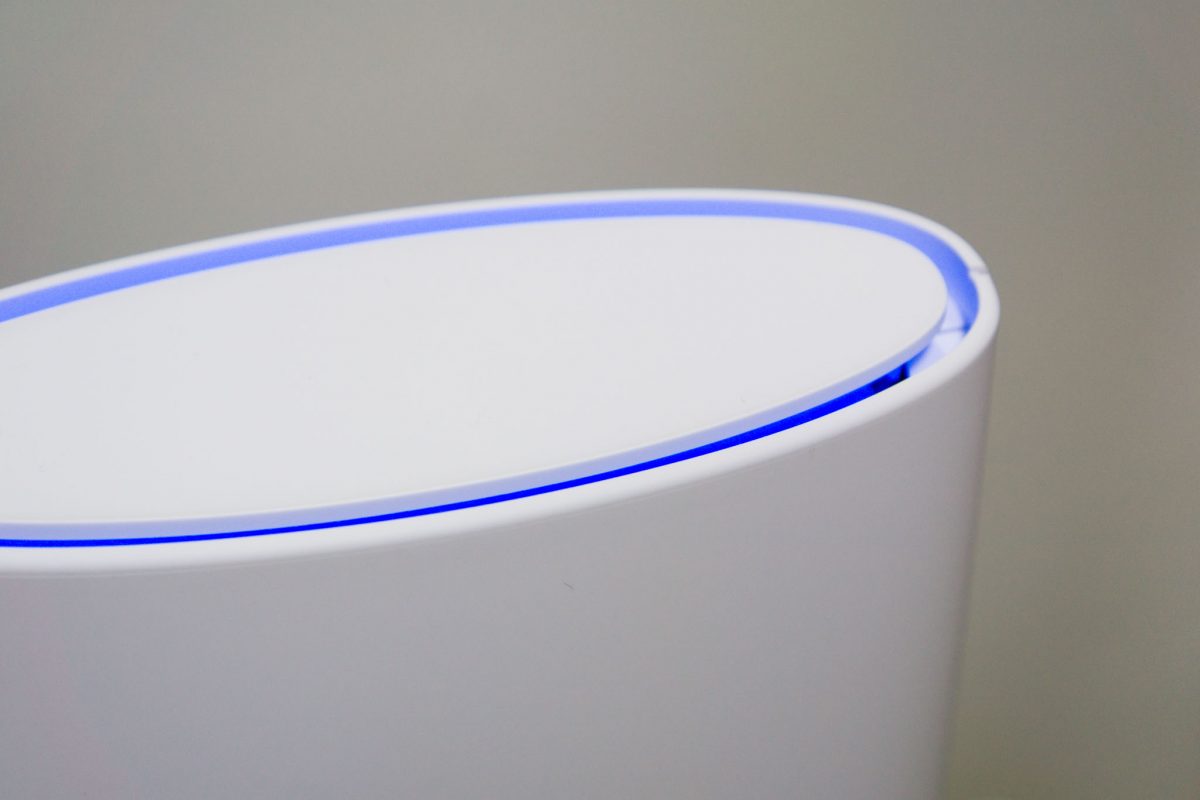 The router unit has a baby blue coloured top panel, and on the back, one of the four Gigabit Ethernet ports is distinctly marked out and labelled for the Internet connection. The other three Gigabit Ethernet ports serve as LAN connections for your wired devices. A Sync button is used for pairing and initiating WPS. There’s a USB 2.0 port, a power button, a DC input jack, and a recessed reset button. A tiny LED indicator above the power button tells you if the device is powered up or not. 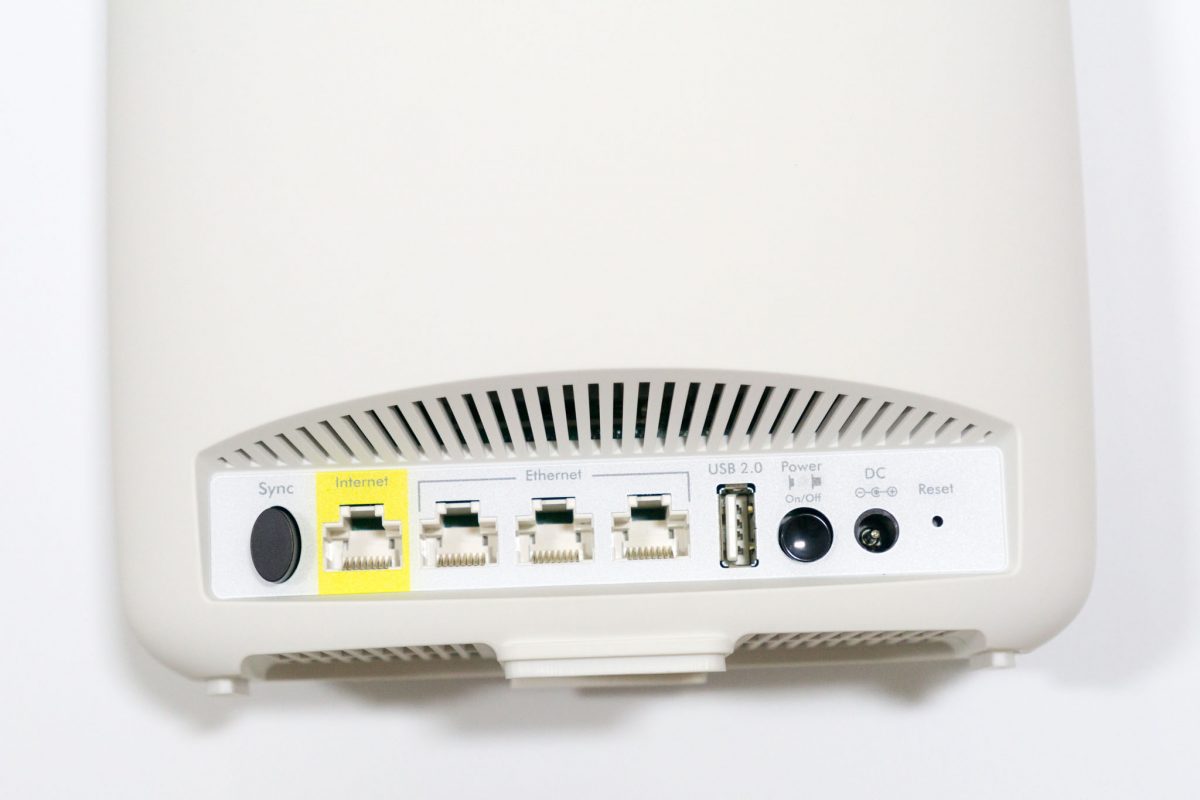 The satellite unit has pretty much the same back panel, except that all four Gigabit Ethernet ports are for LAN connections. Although we’re going wireless on most of our devices, I know there are people, myself included, who still need a bunch of wired connections, and the Orbi’s generous offering of LAN ports is very welcomed.

In particular, having a satellite with that many ports means that even if the broadband connection is tucked away in one corner of your home, you don’t have to worry about the primary Orbi router unit placed at that inconvenient location. The satellite unit can be easily placed wherever you have all your other wired devices, such as your computer work area, and provide all the wired connections there. 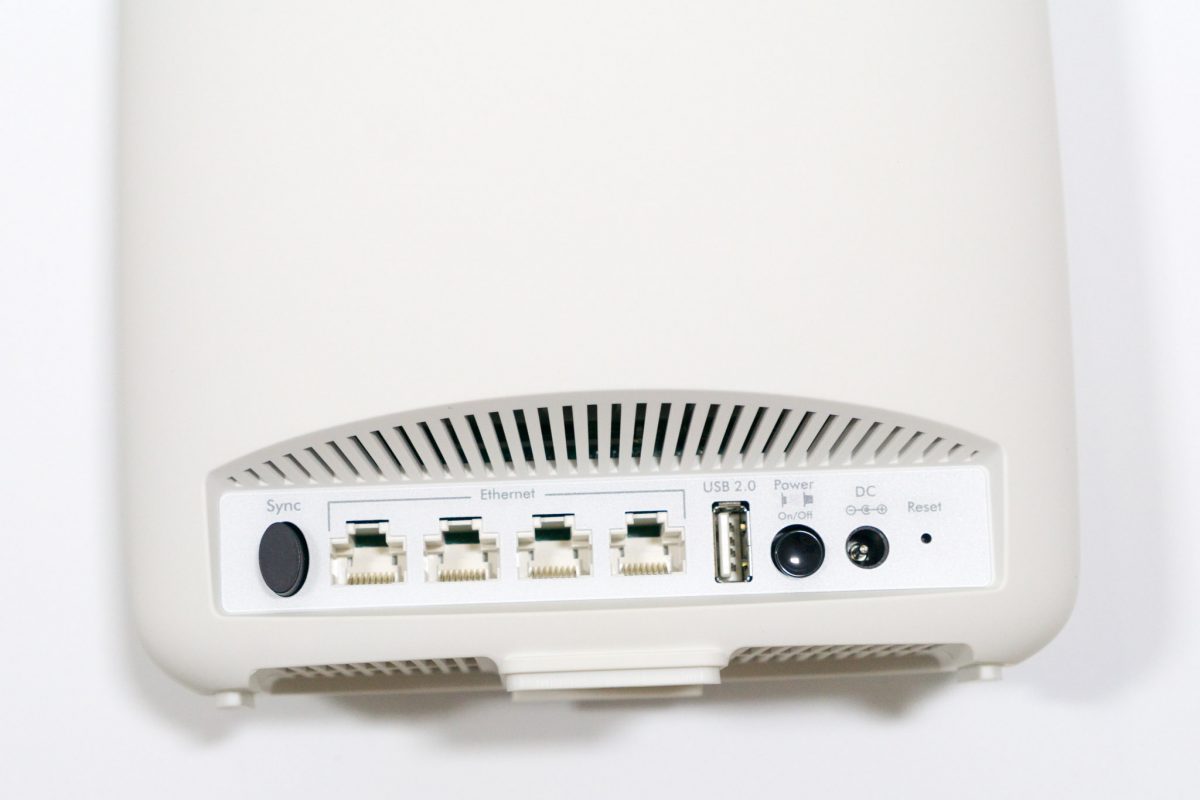 Under the hood, the Orbi Wi-Fi System is very capable and powerful. It’s a tri-band AC3000 device, with one radio on 2.4 GHz supporting 400 Mbps, a second radio on 5 GHz supporting 866 Mbps, and a third radio dedicated to backhaul communication between the Orbi units supporting 1,733 Mbps.

Notice that the backhaul speed is more than the sum of the two other radio channels. Presumably, the backhaul needs additional bandwidth to support traffic from the wired devices connected on the LAN ports too.

The Orbi Wi-Fi System also supports MU-MIMO. I first reviewed about MU-MIMO in the Linksys EA850 about two years ago, and while it is not uncommon in standalone broadband router devices, it’s not available in all mesh Wi-Fi systems, including Google’s Wifi and the 2nd generation Eero. The cool thing about MU-MIMO is that it allows the Orbi to transmit multiple data streams to different Wi-Fi devices simultaneously; not taking turns, one-by-one, but all at the same time. MU-MIMO does require all Wi-Fi devices to support MU-MIMO for it to work.

Setting up the Orbi Wi-Fi System is quite easy. Netgear originally designed the Orbi to be setup and managed through a web interface, much like what you’d expect from conventional broadband routers. But they’ve also later introduced the Orbi mobile app available for both Android and iOS.

I started the Orbi setup via its web interface from my MacBook Pro. It was really easy. Just connect to the default preset Wi-Fi network of the Orbi, the details of which are printed on the underside of the device, as well as on a plastic wrapper around the device when you first unbox it. Then, open your web browser to any website, and the Orbi will redirect you to its login page. (It’s even easier on macOS, as its captive portal login will automatically launch to the Orbi’s login page.) From there, just follow the simple instructions to complete the Orbi setup. 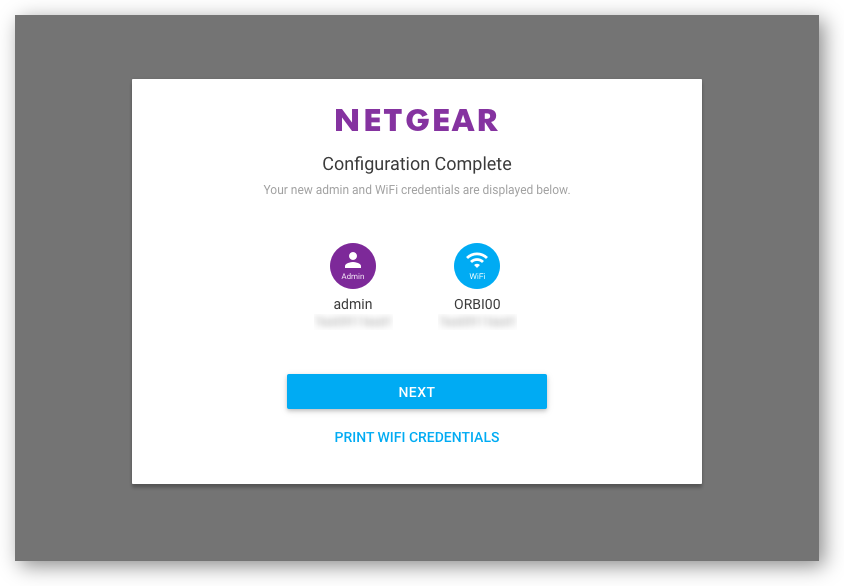 The mobile app is even easier and more appealing to lay-people. It does the same thing as the web interface in as far as the setup wizard is concerned.

The Orbi supports AP mode, so you can use it in conjunction with your existing broadband router, instead of replacing the latter. In AP mode, the Orbi simply extends your existing home network from the broadband router you’re already using. It does not create another home network inside your home network. This feature is often overlooked, and it is worth noting that AP mode doesn’t always work sensibly in other products even if they claim to support it. For example, Google Wifi in AP mode will not support mesh functions, so it’s no good if you need to have both functions.

Router features on the Orbi, unfortunately, are rather modest. Yes, you get the usual port forwarding, firewall, parental controls, Dynamic DNS, IPv6, and guest network support. Although there is a QoS page, there’s just an Ookla speedtest plugin, not actually any setting to configure. There is no estest network support. At the Orbi’s price point, one might have expected more features.

The Orbi has fast Wi-Fi speeds and strong coverage. I’ll save these performance details for another comparison post together with the ASUS Lyra I recently reviewed. 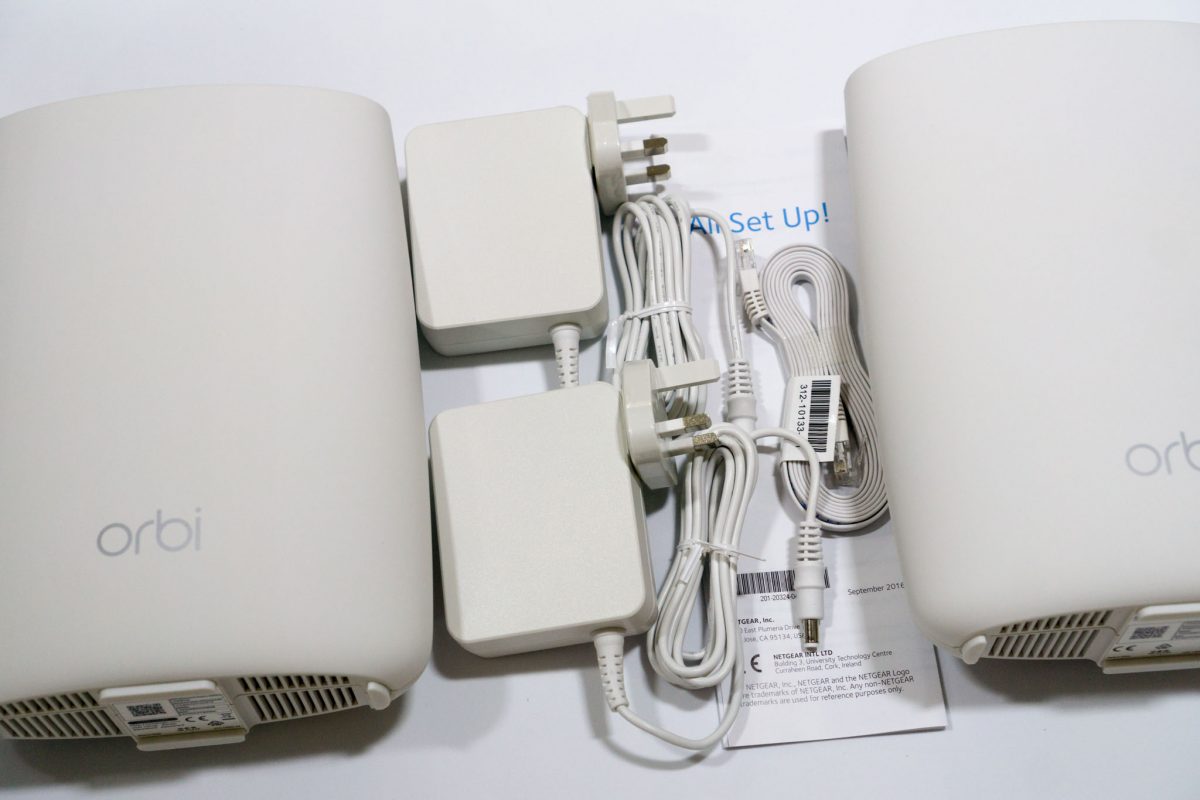 Although launched last year, the Netgear Orbi Wi-Fi System continues to be