Just what exactly is MU-MIMO about? It stands for Multi-User, Multiple-Input, Multiple-Output. You might already be familiar with MIMO. It uses extra antennas to minimise errors and optimise data speeds. MU-MIMO, in essence, sounds like simply a multi-user kind of MIMO. In case you’re wondering, as I did initially, what the big deal is with this multi-user variant of MIMO, and don’t all routers and MIMO technology already support multi-users, well, it’s a lot more than that.

In order for MU-MIMO to work, all the wireless devices must support the technology. That’s right, it’s not enough for the access point or wireless router to support MU-MIMO, but all the notebooks, smartphones and tablets that communicate in the network must support it too. Unfortunately, there aren’t many mobile devices around currently that can support MU-MIMO. Acer did recently unveil four notebook models with MU-MIMO technology. But otherwise, this technology is still not common enough.

Linksys sent the EA8500 for this review, and along with that, three modified Dell notebooks so that I can put MU-MIMO to the test. I’ll write the EA8500 review in another post, so that I can focus on the MU-MIMO technology in this one.

TL;DR version: MU-MIMO proves to offer real performance advantage in a multi-device wireless network. Whereas without MU-MIMO, simultaneous access from multiple devices will hit a performance penalty, adding MU-MIMO can improve performance by about 24% in real-world environments. You do need all clients to support MU-MIMO to reap its benefits.

The notebooks are Dell Inspiron 13 7000 series. These originally come with Intel 3165AC chipset, which don’t support MU-MIMO. Linksys had these notebooks modified to fit in Qualcomm’s chipset, giving it MU-MIMO capability which we will need for these benchmarking tests. The notebooks have an Intel Core i5-5200 CPU clocked at 2.2 GHz, 8GB of RAM, and run Windows 8.1 Pro 64-bit.

I moved all the gear down to my data centre where I planned to start my benchmarking tests. This would be a clean lab environment. The data centre has steel reinforced concrete walls all-around, which minimises much of the external 2.4 GHz and 5 GHz signals straying into the facility. There’s usually no one inside, no microwave ovens, a single wireless access point, and hence little wireless signals to interfere with the tests. It’s the best I can do without using a dedicated wireless test facility. 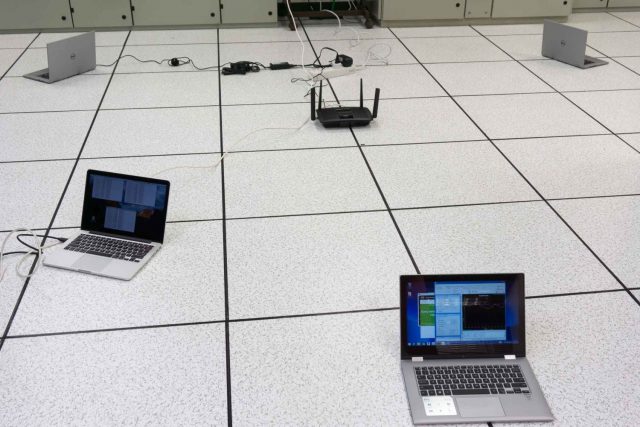 The Linksys EA8500 is setup in the centre, with the three Dell notebooks sitting about 6 feet away equidistant from each other. They communicate with the Linksys EA8500 over Wi-Fi, on the 5 GHz band using 802.11ac. WPA2 PSK is used on the Wi-Fi connection.

The logical network setup is depicted in the diagram below.

I use iPerf as the testing application. iPerf is a popular tool with network engineers, and it is used for measuring various aspects of network performance. In this case, I’m using it to measure the maximum bandwidth achievable over a TCP stream. iPerf is set to use a 1 MB TCP window size, and each test is run for 60 seconds. I repeat each test three times and take the average results. Except when otherwise noted, all tests involve data streaming down to the wireless device, i.e. transmitted from the wired Retina MacBook Pro and received by the wireless Dell notebook(s).

So without further ado, here are some numbers. All figures are in Mbps.

The above figures tell an important story about performance in a crowded wireless network. Notice that the aggregate performance of three wireless clients is worse than that of a single wireless client. Most users are likely going to have more than one wireless device. In many homes, it is not uncommon to see more than one person actively using the wireless network simultaneously. These kinds of situations will see the greatest benefit from using MU-MIMO.

The above tests were performed in my data centre, which is a pretty clean kind of lab environment. You might wonder about real-world performance. For the next batch of tests, I brought all the gear back to my office. My office is bombarded by lots of Wi-Fi. iStumbler on my Mac sees 21 networks, 16 of them on 5 GHz. My table is cluttered with lots of electronic gadgets too.

Here are the iPerf test results.

With MU-MIMO, the aggregate bandwidth of three clients saw about 24% better performance than that of a single client. When MU-MIMO is disabled, the three client scenario suffered a 8% penalty.

I also did some test to measure how bandwidth varies with distance between wireless device and the Linksys EA8500. Here are the figures:

The same figures in a chart, if you prefer, below.

With the Linksys EA8500, performance didn’t drop a whole lot even when the wireless client is in a different room.

Normally I write about a product first before talking about how it performs or how I use it. This time around I’m doing things the other way because I want to talk about the MU-MIMO technology first. But let’s not forget what the Linksys EA8500 is about. In a nutshell, this is a 4×4 AC wireless broadband router, supporting concurrent dual band operation of up to 800 Mbps on 2.4 GHz and 1733 Mbps on 5 GHz. It is powered by a 1.4 GHz dual-core Qualcomm Snapdragon CPU, has a 4-port GbE LAN switch and 1 GbE WAN port, and includes eSATA and USB 3.0 ports. All-in-all a very competent wireless router.

The downside is that MU-MIMO must be supported on all wireless devices, and at this time there aren’t that many of them around.

On the one hand, the Linksys EA8500 is future-ready with MU-MIMO, but it’s a pricey premium for a feature that you’d be hard pressed to benefit from today, because you likely don’t have MU-MIMO capable devices now. There’s often this chicken-and-egg problem with new technology. If there’s somewhere you need to start upgrading, the wireless router seems like the right place to begin.

Watch out for another separate review on the Linksys EA8500, apart from the MU-MIMO aspect of it.