Back in 2013, when the haze in Singapore reached record levels, I decided I would get my own dust sensor. But before the sensor arrived, I was exploring other ways of determining the severity of the haze. How do we know the haze is bad? Most of the time, it’s simply by looking with our eyes. Smell too, perhaps, but mostly by looking.

So why not get data about visibility? It turns out airports can help us with that. Visibility is important information for aviators, i.e. pilots, particularly when they fly into an airport. They need to see the runway. In poor visibility, pilots will have to rely on navigation instruments. Airport visibility information is one of the key pieces of data in airport meteorological reports. Visibility is measured in terms of how far away can you see, and that distance is reported in units such as km. Visibility of 10km is considered inifinite, the maximum that is reported.

I eventually got around to building my dust sensor, so although I had started to fetch visibility information, they became less important and forgotten. Well, until a friend asked about a visibility sensor, and then I remembered about this little exploratory exercise.

Airports report accurate and current meteorological data, not just forecasts, because this is what’s needed by pilots when they land or take-off. The visibility information in the reports is sort of an objective measure, and one that is current. Of course, air quality isn’t just about visible smog, and I don’t want to suggest that visibility information can replace air quality indices like PSI or AQI. But you know what? At least the airport weather reports are current, not some average of the last 3 hours, or worse, of the last 24 hours.

The last few days I was examining the visibility information, and I think they pretty much reflect the current situation better than the PSI readings appear to give. (Again, of course, there are aspects of air quality that we cannot see.)

For example, right now at 9am on Saturday 26 September 2015, the sky looks pretty good. NEA’s 3-hr reading is 73, their 24-hour readings is 96-121, and the visibility is 9km at the moment. 9km is just a little shy of perfect. I’d say right now the 3-hr reading seems pretty representative of what we can see, and that’s probably because it has been generally stable the last 8 hours.

Here’s some data to look at from yesterday (Friday 25 September 2015). 3-hr and 24-hr (upper bound) is taken from NEA’s website. Visibility data is from NOAA. Note, the meteorological reports are available at more granular levels, but I’ve just only taken the readings from the hour. Also, in order to make the chart lines easier to compare, I’ve inverted the visibility numbers, plotting “10000 – x” where x is the original visibility. This way, larger values mean poorer visibility, similar to how larger PSI values mean the haze is worse. The PSI scale is on the left vertical, adjusted visibility scale on the right. 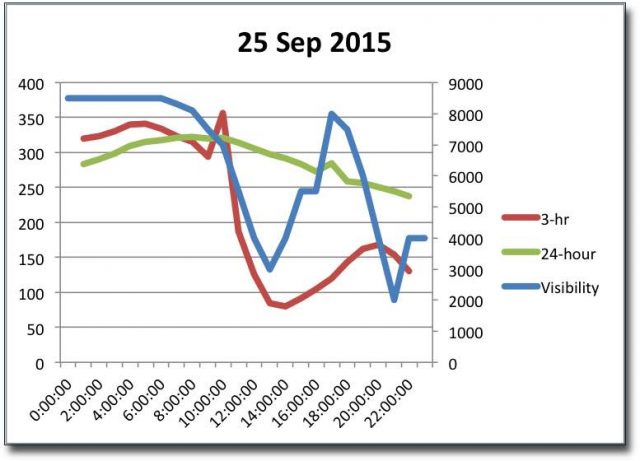 See how the visibility data moves quicker and earlier than the 3-hr PSI reading? In fact, there are more visibility data points which I’ve not graphed. Further, the 24-hr PSI is such a gentle line.

I wonder why NEA just cannot give us a more real-time instantaneous indication of air quality. Leave it to people to decide what to do. People who don’t want to interpret data can simply just read the health advisories.

Oh well, of course I do have a theory why NEA refuses to give more accurate data. But that’s a whole different story.

Incidentally, airport meteorological services also give really good forecasts. For example, on Thursday night when MOE announced the closure of primary and secondary schools, the forecasted visibility was actually much better for the next day. But of course, MOE could be under pressure to do something, and forecasts can be wrong. We do know now that Friday did turn out to be a much better day than Thursday.

Ps: Forecasted visibility till 2pm Singapore time today 26 September 2015 is 7 km. It will just get slightly worse from how it is in the morning.