Google launched the second generation of their Pixel smartphones this year. I just got hold of the new Pixel 2 XL, and while I’ll write a full review later, I wanted to share some quick first hour impressions about it.

The initial hands-on reviews pouring out about the Pixel 2 XL were mostly all good. But soon, problems with the LG-made display surfaced. The Internet was abuzz with the disappointing display. The Pixel 2 XL is otherwise a really good phone, but the poor display could be a showstopper. Let me address that elephant in the room first.

The blue-shift is real. The initial setup screens mostly have all-white backgrounds, and right away it is easy to see the blue tint whenever the displayed is angled “wrongly”. To be fair, the display still looks passable until about 30°. You might begin to notice the blue-shift after that. At 45°, it’s quite hard to not see that blue tint.

When you hold up the Pixel 2 XL to look at it, the blue tint should not be a problem. However, consider the case when you set the phone down flat on the table, and you look at it at this angle, the blue tint is definitely noticeable.

Is this something you could get over with? I think, considering the overall features of the Pixel 2 XL, I could forgive the blue-shift. It is annoying, but it’s possible to ignore it.

It’s too early to tell if burn-in is an issue. It’s worth noting that Google says they haven’t found it to be an issue, and they’ve extended warranty to two-years to allay any concerns. (Update: After a week, I don’t see any signs of burn-in. However, I did get the Nov 5 update almost immediately so the device have had that from the 2nd day of use.)

The subdued colours, which Google calls “natural”, is also very obvious. Vivid colours is enabled by default, which boosts colours up by 10%. Even with this boost, I still find the colours wrong. Alright, so maybe I’ve been spoilt by the unnatural vibrancy of AMOLED screens. But to be fair, I’m comparing with my MacBook Pro’s display. Even the colours of Google’s own logo, or the Facebook logo, just look grossly different. I start to wonder what sort of “natural” Google takes as reference.

Google just released, today, the promised software update to offer saturated colours to match what other AMOLED smartphones like the first generation Pixel XL had. I turned it on, and my first immediate reaction is that, eeks, this is far too saturated.

I didn’t go around purposely finding problems with graininess or splotchiness in the display. I’ll say that in normal use of the Pixel 2 XL, which means not loading grey-coloured images and adjusting display brightness to find fault with the display, the screen does look just fine.

The Pixel 2 XL display can get very bright, and it can also get very dim. The dimness works very well with the always-on ambient mode works at night. My other phones tend to be just too bright to use in darkness. 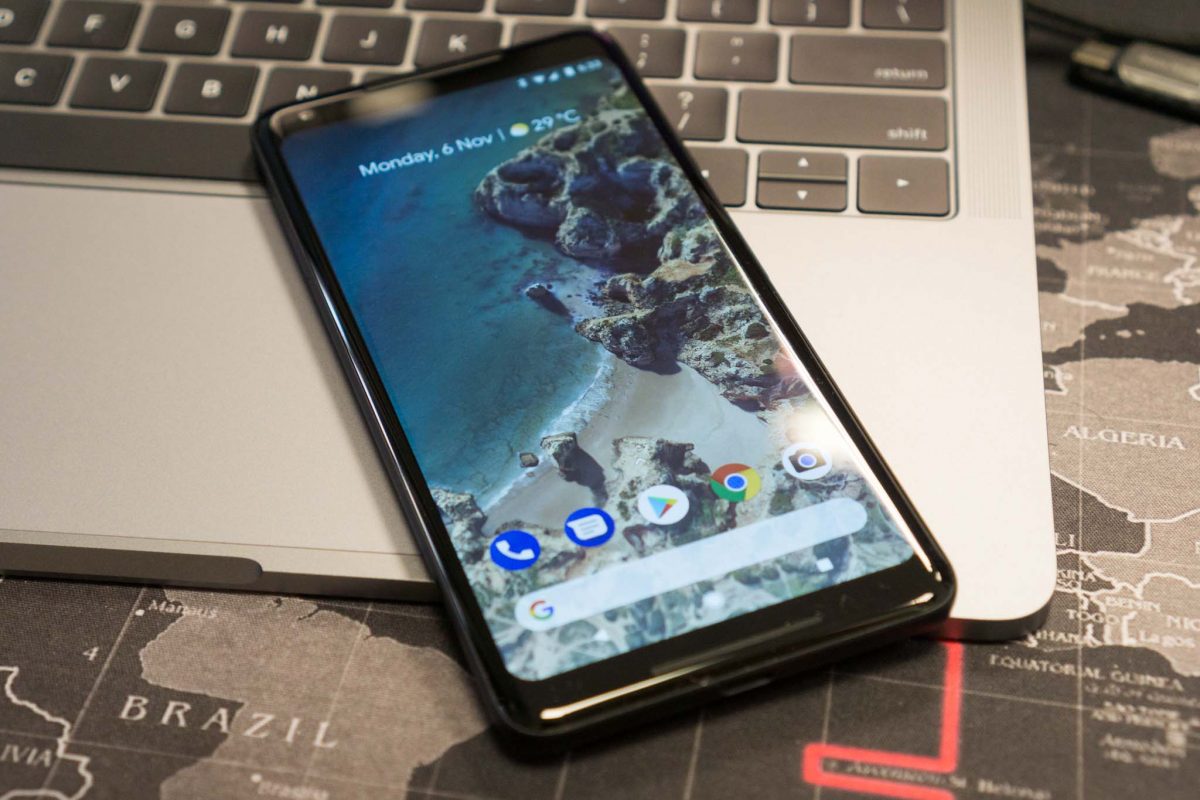 In particular, one area that impressed me is with the touch latency. Many Android smartphones (even flagships, and including last year’s Pixel XL) have this minuscule latency is responding to touch. This is very noticeable when you “touch-swipe” to scroll, meaning when you finger is already in motion before hitting the screen’s surface.

Needless to say, one of the star highlights of the Pixel 2 XL, the camera, is indeed truly excellent. Last year’s Pixel XL was already very good. The Pixel 2 XL makes it even better, particularly with the very impressive portrait mode. Finally, not only do we get a great camera, we also get all the great bokeh effects like from other flagship smartphones. The Lens Blur from last year was just an inexcusable gimmick. With dual-pixel magic and Google’s AI software, the rear camera is capable of really impressive bokeh, although I do think sometimes they may have taken it too far.

The front-facing camera is a bit handicapped, but it still manages to produce impressive portrait shots.

Considering the amount of photography we do on our smartphones these days, the performance of the Pixel 2 XL cameras makes the smartphone very enjoyable to use.

The Pixel 2 XL’s front-facing speakers are really enjoyable too. I wonder why anyone would ever design speakers to fire sound in any other direction. The correct direction is to face the user. I wouldn’t say the Pixel 2 XL’s speakers are out-of-this-world, but it’s worthy of mention simply because it is designed correctly.

In terms of the physical size, the Pixel 2 XL is very comfortable to hold. It’s not too wide, so gripping the device is easy. The plastic coating on the back adds texture for better grip, but it feels plasticky. The OnePlus One did a really cool sandstone texture thingy back in 2014. I’m not asking Google to do the same, but I thought perhaps Google could think of something better than to just put plastic on metal. It’s functional, no doubt, just not spectacular.

On that point, the Pixel 2 XL’s overall design isn’t something to write home about. It’s a good, safe, design. It has some distinguishing features, so you know it is a Pixel when you see it. To this end, I quite enjoy the approach that Google has taken. I don’t fancy a flashy phone. Flashy in performance and function is nice, but no need to be flashy in appearance.

Finally, it’s about the entire package that Google is trying to pitch with the Pixel 2 XL. The lack of 3.5 mm headphones jack is disappointing, but I really looked forward to having the Pixel 2 XL’s IP67 water-resistance. The Pixel 2 XL is now pool-friendly, just like the flagships from Samsung and Apple.

My verdict? For pure Android fans, yes, the Pixel 2 XL is definitely a go. For those who don’t care about where they get their Android smartphone from, there still are some stellar features, like the camera, that could be a strong attraction.