Yes, I’ve fallen to the “dark side” and acquired an iPod Nano this week. I got a pretty good deal, paying about S$292 for the 16GB model. I’ve been doing some research, and even waited out till the IT Show last week to see what deals there would be. But unfortunately, Apple is quite sticky about fixing their prices. So all IT Show had to offer was freebies, not a cheaper iPod. How did I get my iPod?

I asked a friend to help pick up one while he was in Australia. It seems like Apple Australia has about the cheapest iPod Nano. At least, it’s a whole lot better than in Singapore, US, and Malaysia. The Apple Store  Australia sells the 8GB iPod Nano at A$199, and the 16GB version at A$279. The Australian dollar was 1:1 to the Singapore dollar at one time. I could have gotten my 16GB iPod at S$279, or if I manage to get a GST refund, then at only S$254. But alas, the Australian dollar went up, about S$1.05 to A$1. I reckon it’s still a pretty good deal considering that the 8GB and 16GB versions retail at S$248 and S$328 respectively in Singapore.

There are no freebies. I don’t want the freebies. The shops in Singapore are quite ridiculous. Epicentre, for example, was giving away a silicon case AND a crystal case (among other thing). Wouldn’t you think that a person would just need one or the other, not both? No, you cannot exchange it for a discount, nor can you exchange for another freebie. It was no better at Pacific City. It’s like how StarHub keeps giving you a free cable modem when you re-contract. If you’re re-contracting, surely you already have a cable modem eh? 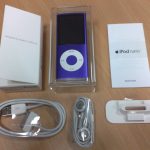 The iPod Nano is exactly as it has been described and reviewed. I think, for people like me, I do so much research online that by the time I get a product into my hands, I already know exactly what to expect.

The diminutive plastic packaging box contains the iPod Nano itself, a few pieces of paper (documentation and other legal stuffs), the USB to dock connector cable, a pair of earphones, and the dock adapter (to use the iPod Nano in the Universal Dock).

The iPod integration with iTunes is really cool and makes for a wonderful total user experience. Although I’ve heard so much of it, this is my first iPod, so all the little discoveries I make along the way are fascinating.

I do have one suggestion to improve the iPod Nano though. Give it bluetooth, so that it can sync wirelessly with iTunes on a Mac or PC. Everything on the Mac is so nice and elegant. Yeah, except that now I need a USB to dock connector cable. It’s not something that you have readily available everywhere, so now I’ve got to remember to bring it wherever I need it. How inelegant. My N95 8GB syncs via bluetooth. (I know, bluetooth is so much slower… but let the user decide between elegance or speed.)