Last week, you may have come across this news about how a passenger claimed Singapore Airlines billed him some S$1.5K for his use of wireless Internet onboard his Singapore bound flight from London. He claimed to have bought a 30MB package costing US$30, but ended up paying another US$1142 in excess data charges. That was for viewing 155 web pages and sending a bunch of emails.

So this guy couldn’t live without the Internet for a 12 hours flight. He soaked up so much data charges, and is now complaining about the cost. Since the email he purportedly sent, including a 4MB PowerPoint presentation, are work related, surely this CEO could charge the cost to his company?

The thought of inflight Internet sounds nice. The prices could even seem affordable (e.g. StarHub has a promotion offer of US$25 unlimited data per day). But I suppose it’s possible some people get caught up choosing the wrong plan and end up paying dearly. 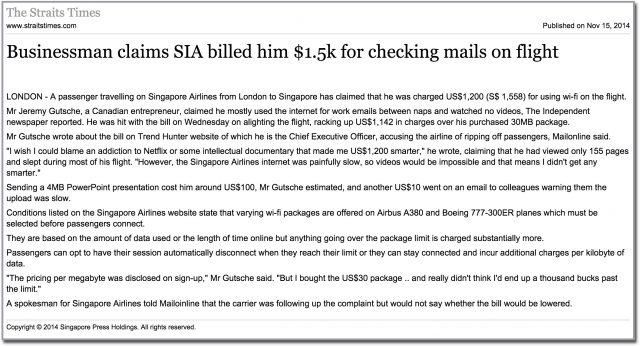 This situation reminds me of my gripe with the way our gadgets are consuming up network data. Once upon a time, your computer does something only because you consciously and deliberately asked it to do at that instance in time. Nowadays, however, your computer wants to do so many things automatically.

It started with anti-virus programs checking for signature updates. Eventually, this has escalated to a situation where operating systems can automatically check and download latest software updates. Sometimes these updates can be really huge. This isn’t just about desktop operating systems anymore, because even mobile platforms are automatically checking and downloading updates for you.

My gripe is that sometimes I’m on a slow network. I don’t want my computer to suck up so much bandwidth that I can’t get anything else done productively on the network. You know, like for example, when my notebook is tethered to my mobile phone hotspot, I don’t want it to go do all those automatic stuffs. Of course, without unlimited nor generous data quota nowadays, cost is also another concern.

I know, to some extent on both Android and iOS, you can tell your mobile device to use the network only while on Wi-Fi. For example, you can tell Android to do updates only on Wi-Fi, or upload photos only on Wi-Fi. But what if your mobile device is only Wi-Fi to begin with? My Nexus 7, for example, is Wi-Fi only. Sometimes, it’s connected to my home wireless network, but other times it is tethered wirelessly to my mobile phone. To the Nexus 7, it’s still just Wi-Fi regardless of how the Internet is delivered it.

Another option is to give users a toggle to tell the gadget, whether the network is free-for-all or on a tight-budget. If free-for-all, let the operating system do whatever it wants to do. If it is in tight-budget mode, then stop doing anything in the background unless the user specifically authorises it to.

We need our operating systems to become more sensitive to its network use. If it cannot figure things out automatically, then at least give users the option to control network usage.