The Raspberry Pi Foundation made a surprise announcement two days ago about the release of the new Raspberry Pi 2 Model B. It’s a supercharged version of the previous generation B+ model. Geeks around the world, at leat all those who are into these sort of gadgetry, swooned over the new Pi. Well, it’s arrived, on my desk today.

For those unfamiliar with the Raspberry Pi, let me just bring you up to speed. This is a tiny computer about the size of a credit card. You’ll have to plug-in a monitor, keyboard, and probably a mouse, as well as an SD card to serve as a hard disk. This is a full-fledged computer, and it runs Linux. How much does it cost? Just S$45 (before GST).

One of the great things with the new Raspberry Pi 2 Model B is that it will run Windows 10. Microsoft announced that they will make Windows 10 free on the Raspberry Pi 2.

Other hardware features on the new Pi 2 Model B are: 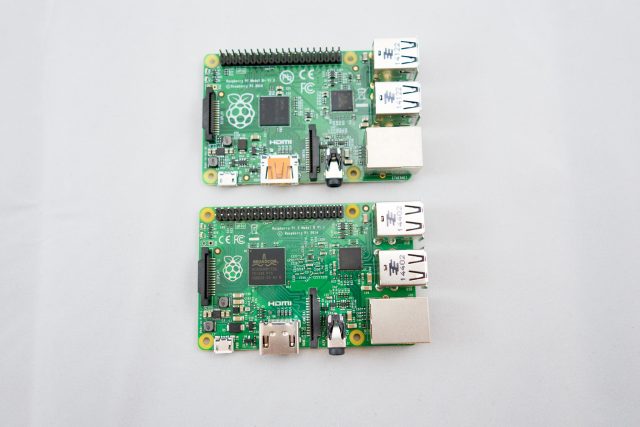 The system-on-chip is noticeably bigger on the new Raspberry Pi 2 Model B, and apart from several other changes in the individual component parts, the board layout remains the same. More importantly, the ports, interfaces, and various other pinouts, including the mounting holes, are all in identical positions. You can use the same casing for the old Model B+ with the new Model B.

The Raspberry Pi Foundation claims the new system-on-chip is six times faster than the older one. I’ve used the old Model B+ to run a media centre, using RaspBMC, and I think its performance is already comparable to other TV set top boxes that you can buy off-the-shelf. I’d expect the new Model B to fly.

I’ve longed bemoaned how the Raspberry Pi’s price had remained constant, with meagre hardware changes, for the last 2 years or so. You know Moore’s law. He didn’t actually say it this way, but the modern-day interpretation is that every 18 months, the same hardware should be half the price, or the performance should be doubled. Well, finally, the Raspberry Pi Foundation has delivered something exciting.

Will you be getting the Raspberry Pi 2 Model B?