We got a new Dell desktop computer at home. The Wife had gotten it because the old Acer desktop it was replacing has started showing signs of trouble. The task of setting up the new Dell fell upon me, since I was the “IT person” around the house.

This is a Windows computer that is being replaced. It’s a task that’s going to take an hour or two. Maybe even more. First, you’ve got to take out the old stuff, clean up the desk area, put in the new computer, and sort out the software installation. That’s not including the parts about backing up the old stuff and restoring them in the new computer.

The Mac has Time Machine where magic just happens. Even before the era of Time Machine, the Mac already tried to make things pretty seamless. No, I’m not trying to start an OS flame war here, but there is no doubt that OS X does make things relatively easier. 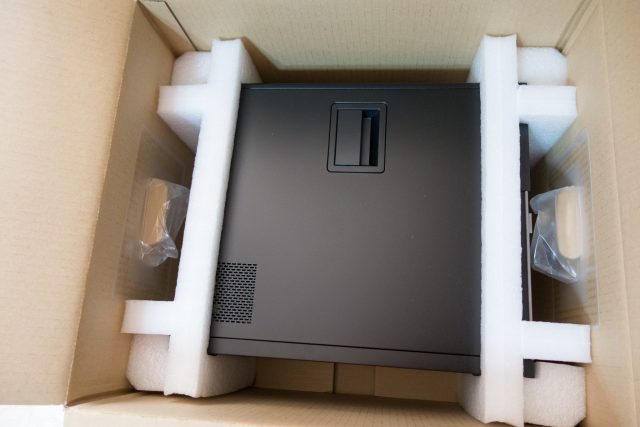 I love unboxing new gadgets. Setting up Windows, of course, was a totally different matter. New stuffs are clean, pretty, and, well, new.

The new Dell monitor was… there’s a problem. Why is there like one and a half fingerprint on the screen?! Hey Dell, what sort of QC is this? Was the box somehow opened and resealed?

The fingerprints are, unfortunately, smudged, so I guess we’re not going to be able to run the prints and find the culprit. I don’t suppose CSI would be interested to investigate this misdeed. My monitors need to be perfectly clean. These fingerprints were completely unacceptable. I had to clean the screen first before anything else.

Moving on, here’s the obligatory shot of the innards of the Dell OptiPlex 9020.

There’s just one spare bay for another hard disk, but no rails are provided. The spare bay is designed to be used with a rail, so I’m not sure if a standard hard disk can be mounted in there.

Here are the hardware specifications of this OptiPlex 9020, in case anyone is interested:

It’s pretty much baseline specifications for running Windows. In this case, it was shipped with Windows 7 Professional.

The display is an E-series E2214H 21.5″ wide-screen monitor. It’s not as pretty as the S-series S2340L monitor I got last year, but it is perfectly functional. The E2214H is also supposed to be more “business class”, with better warranty coverage. The S-series is more of a look-nice consumer standard monitor.

After the hardware setup was done, there were more software stuff to sort out. Things like Windows updates, and installation of other required applications. You know, like Google Chrome. It’s not a Mac, so there’s no Time Machine to do magic. Fortunately, there weren’t many apps to do, and much of the data that’s already been copied off to a network storage can remain there.

This reminds me about putting data on the cloud. Now, I belong to that group of people who believe that I need to own, physically and in other ways, my data. For me, cloud storage preferably means in my private cloud. The point here is that we need to rethink storage in terms of survivable cloud storage, so that the personal computer, i.e. that computer you sit in front of to use, is mostly a disposable piece of hardware. It can fail, it can be replaced, and it won’t cause you much inconvenience. We are sort of already there with things like documents in iCloud, though they are still all public cloud services.

I digress. Back on topic, the Dell PC has limited options for future incremental upgrades. I’ve already mentioned the only spare hard drive bay, without spare rails included, and I’m not sure if a standard hard disk drive will mount directly in it. You could simply leave the hard disk resting in there without being secured by screws, of course. You could also re-purpose the front-facing external 5.25″ drive bays.

There are a total of four RAM slots, two already in use, leaving two free ones for additional RAM modules. The following expansion slots are available:

Though in my case, one slot is already taken up by the AMD Radeon R5 240.

Dell doesn’t put a security-seal to prevent undetected opening of the chassis, unlike what Acer did on our last desktop. So you’re able to self-upgrade some components if you so desire.

Desktop computers are pretty much like commodity these days. This comes from a reputable and well-established company, I don’t expect any surprises in terms of quality, warranty, or difficulties with support. I can’t say this PC is in any way exceptional or great, but it’s certainly perfectly functional and I don’t have any complaints about it.

5 thoughts on “Setting Up New Desktop”