Sony’s official remote for the Alpha a6000, the RMT-DSLR2, costs S$39. It doesn’t cost a fortune, but it isn’t all that cheap either. Now, you can get a 3rd party remote control for much less. Like this JJC RM-DSLR2 remote, which costs only US$8.99 from Amazon. Pity that it doesn’t ship to Singapore directly.

The JJC RM-DSLR2 works for numerous other Sony NEX, SLT, and DSLR cameras. I think, probably, as long as the Sony camera has some sort of infrared receiver port, this remote will at least work to some extent. The shutter button should at least work, and I think for most people this is the main reason for needing to use a remote.

The RM-DSLR2 arrived in good condition, but it was not working. I was a little disappointed. I checked that the battery was fine, my camera was setup to enable infrared remote, but the remote just wouldn’t work. I disassembled the RM-DSLR2, then put it back, and it sprang to life. I suppose there was some loose connection somewhere that got rectified when I took it apart and reassembled it.

Once I got the RM-DSLR2 working, it worked beautifully. The button arrangement is mostly the same, though not completely identically, as Sony’s RMT-DSLR2. Most importantly, all the same keys are present. 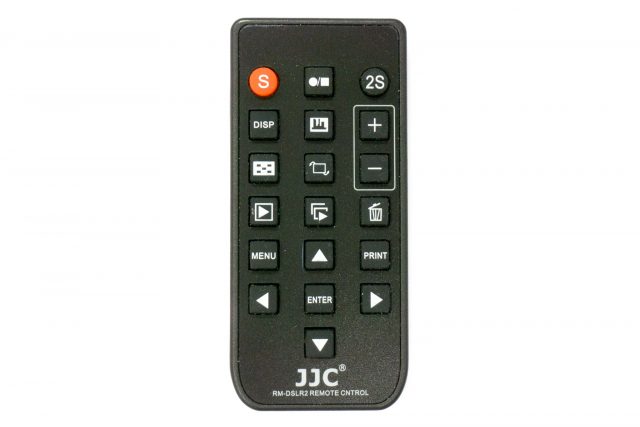 You can zoom with the + and – buttons. You can even press the Menu button, then use the arrow buttons to navigate the menu system. Of course, unless you can memorise the exact layout of the menus, you’d need to look at the LCD screen to coherently navigate around.

For just US$8.99, this JJC RM-DSLR2 is a really nice infrared remote for compatible Sony cameras like the Alpha a6000. Hopefully others don’t run into the misfortune of receiving a set that requires some tinkering before it comes to life.