Android 6.0.1 has been released, but it may still take a while yet, like another week or two, even for an official Nexus device, to actually receive the OTA update. If you’re impatient, like I am, it’s possible to fetch the OTA update file and manually apply the update right away. Here’s a how-to guide on the manual OTA update steps. 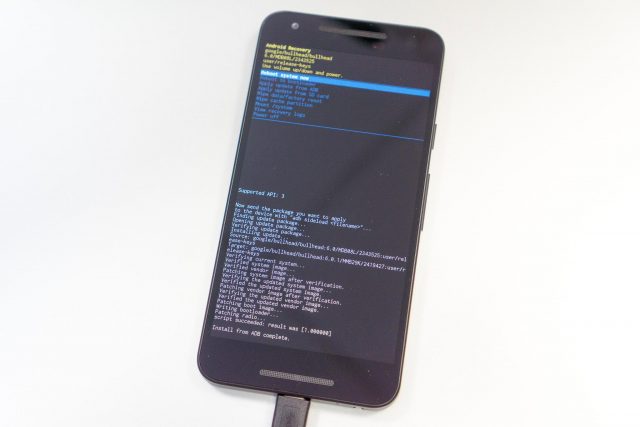 I’m writing this guide to update the Nexus 5X to Android 6.0.1 build MMB29K, from build MDB08L. You could easily follow the same steps for other OTA updates, and they should apply almost similarly to any Nexus device. In fact, any seasoned Android user may find these steps familiar and easy. This guide is for the novice, perhaps those doing such an OTA update manually for the first time.

Updating your unrooted Nexus device this way doesn’t invalidate the “officialness” of your phone in any way. If your Nexus was locked, it will remain locked. For all purpose and intent, your Nexus device would be indistinguishable from one that had truly been updated over-the-air. Updating your device this way is effectively the same as doing the actual update over-the-air. You will not need to wipe your phone, and all your data is preserved.

The first order of business is to locate the OTA update file. Usually, some kind soul who has received the OTA update over-the-air would have discovered the update source and shared the information. Here’s a post from Android Police on the Android 6.0.1 Marshmallow OTA. You need the specific OTA that applies to the build you currently have. Your current build is found under Settings, About phone, Build number. For my Nexus 5X, the exact OTA file for me is: this.

This is known as the OTA update file.

Don’t worry about whether or not the OTA update file is legit. It’s downloaded over HTTPS from Google. It’s also signed, and the signature is verified during the update.

Next, you need to get adb, the Android Debugger Bridge, for your computer. It’s part of the Android SDK. Download and install the Android SDK for your platform. Windows users will also need to install Google USB drivers (which is included in Android SDK). Mac users will find that their USB just works. Then, locate the actual adb executable. For Mac users, it’ll be in ~/Library/Android/sdk/platform-tools/adb.

You’ll also need to enable USB debugging on your Nexus device. If you’ve not done tthis, then here are the steps.

The last two steps are not needed to do an update. We’re doing it only so that you know your Nexus device and your computer are setup correctly to communicate with each other.

Now, we’re ready to get on with the actual OTA update.

The OTA update will now run and do its work. Sit back. The phone will eventually reboot. There’ll be an Optimising Android apps step, before your home screen will load and everything’s completed.

Your OTA update is done.

Your Nexus device is still as official as it can be. The next time there’s an OTA update, your phone can still fetch and apply the update, according to Google’s schedule for your phone. Of course, if you’re impatient, you could go the manual OTA update route again.