At one time, external antennas disappeared from broadband routers because they look better without them. External antennas, however, are back in style. These days, the more the merrier, more than they ever had in the past. D-Link now joins the spider-gang with their all new DIR-895L, a tri-band router with eight antenna that pushes out some 5300Mbps of Wi-Fi bandwidth.

The AC5300-spec’ed DIR-895L is currently D-Link’s flagship, offering lots of features and performance for the ultimate Wi-Fi broadband router experience. With tri-band AC5300, the DIR-895L supports three Wi-Fi bands simultaneously: 2.4GHz band with up to 1000Mbps speed, and two 5GHz band that puts out 2165Mbps each.

The DIR-895L router supports many advanced Wi-Fi technologies such as MU-MIMO (multi-user, multiple-input multiple-output), 4×4 data streams and Advanced AC SmartBeam. MU-MIMO, which I first reviewed in the Linksys EA8500 broadband router, is a cool technology that enables transmission of data to multiple clients at the same instance in time. It does require clients to also support MU-MIMO. Advanced AC SmartBeam, on the other hand, tracks your Wi-Fi connected devices for enhanced Wi-Fi speed and range.

Apart from Wi-Fi connectivity, the DIR-895L also offers four Gigabit-Ethernet ports, a USB 3.0 port, and a USB 2.0 port. The USB ports can be used to connect storage devices.

The DIR-895L comes with eight detachable antennas. A universal power adapter is included with both UK 3-pin and Euro 2-pin power cords. An RJ45 Ethernet flat-cable is also provided in the box.

The red-coloured angled body of the DIR-895L with its eight antennas looks cool and futuristic. Some people may describe it as looking like a UFO. Others might think about spiders and that the DIR-895L may look scary in the dead of night.

All the buttons, switches, and ports are on the back of the router. 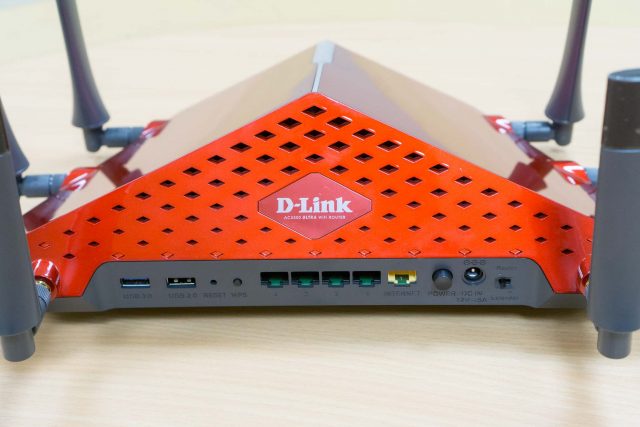 Starting from the left, you will find a USB 3.0 port, and a USB 2.0 port. Next is the pinhole for the reset button, and then the WPS pairing button. Following on are four RJ45 Gigabit-Ethernet LAN ports and the RJ45 Gigabit-Ethernet WAN (or Internet) port. Then, there’s the power button, and the 12V DC input jack. Finally, there’s a dedicated Router/Extender switch to allow you to easily change the operating mode without getting into the configuration at all.

Thankfully, D-Link has made significant improvements to the web-based administration interface. It looks a lot better, and more modernised, than any other D-Link broadband routers I’ve used.

The DIR-895L software features include everything you’d expect of any modern broadband router. The software supports firewall capabilities, time-schedules, port-forwarding, QoS, dynamic DNS and various ways to serve out storage that’s been connected to its USB port.

The QoS features can be very helpful to prioritise network traffic so you can ensure that your streaming or gaming applications work smoothly. You can drag-and-drop applications to setup the QoS priorities. For power users, however, the lack of visibility into how the applications are defined, and the ability to define more application types, limits the usefulness of the QoS feature.

The DIR-895L also supports a guest zone for easy sharing of your home’s Wi-Fi with your house guests. There’s also L2TP over IPsec VPN support.

With D-Link’s mydlink app, you can also configure the DIR-895L directly from your smartphone, and you can do so from anywhere on the Internet.

D-Link’s DIR-895L packs plenty of Wi-Fi speed, at least in theory, and quite likely more than your home broadband connection. Although real world speeds aren’t going to be anywhere near the theoretical speeds, you can at least be assured that the DIR-895L is one of the fastest and most powerful broadband router you can get today.

If you’re a very heavy Wi-Fi user, you should be able to appreciate the DIR-895L’s capabilities and performance in your home network. The refreshed, modernised, web administration interface, as well as smartphone-based mydlink app, makes it easy to manage this broadband router.