Sony announced the Alpha a6000 a little over a year ago. Touted as the world’s fastest auto-focus APS-C mirrorless camera, the a6000 replaces the NEX-6 camera and, to some extent, the NEX-7. Featuring a 24 MP sensor, 11 fps continuous shooting, EVF, Wi-Fi and NFC, the a6000 looks to be a very capable mirrorless interchangeable-lens camera. We’ll find out more in this review.

The NEX moniker has now been phased out. Sony has renamed all its interchangeable lens cameras under the Alpha brand, which includes both APS-C and full-frame E-mount and A-mount cameras. The a6000 is the flagship in their current line-up of APS-C E-mount cameras.

Category flagship as it may be, the a6000 is positioned as a mid-range camera. That means it doesn’t have all the pro features, but there are some nice features that will appeal to enthusiast users. These include the EVF and dedicated hardware buttons with customisable functions. 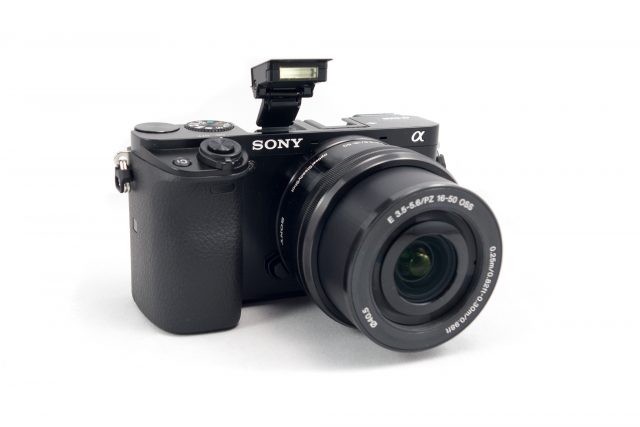 The a6000 has a relatively large rubberised hand-grip, which makes it very comfortable to hold the camera. The integrated pop-up flash has a guide number of 6. The flash arm can be pulled backwards, so you can manually aim the flash upwards, giving some sort of bounce effect.

The shutter release button is comfortably positioned on the top of the battery grip. The power switch wraps around the shutter release. Moving clockwise along the top of the camera, the next button is the first of two custom buttons. You can assign any one of forty plus functions to both customisable buttons. In fact, you can also reassign the functions of several other buttons, such as the AEL button, which already have pre-assigned functions.

Next, there is a control dial, followed by the familiar mode dial. The control dial provides another input wheel for changing settings, and its exact function depends on your current mode. The mode dial provides access to the usual P/A/S/M modes, two more program auto modes, a scene mode, panorama mode, movie mode, and a memory recall mode.

The integrated pop-up flash that we saw earlier is in the centre. On its left is the Multi-Interface Shoe. Apart from functioning as a standard ISO hot shoe, there are some extra contacts that are used with some Sony accessories such as microphones.

The a6000’s back may look a little intimidating initially, but they are well designed and easy to use. Moving clockwise from the top left, the first thing you’ll see is the Electronic Viewfinder, or EVF. This is an OLED EVF with 1.44 million dots, which although far fewer than the 2.36 million in the NEX-6’s EVF, it’s still sharp and very bright. A proximity sensor on the EVF enables the a6000 to automatically switch between the EVF and LCD screen. A diopter adjustment wheel next to the EVF allows you to tune the EVF to your sight.

The flash release button comes next, and then followed by the AEL button. The AEL button, although having a predefined function for auto-exposure lock, can be customised to perform some other function.

In the far right, almost around to the right edge of the a6000, there is a movie record button. It is a little awkward to reach. On the one hand, it makes it difficult engage accidentally. On the other hand, if movie recording is something you’re going to do very regularly, the button can be said to be a little inconveniently placed.

Next, the Function button (“Fn”) brings up a menu of 12 shortcuts to quickly get at various camera settings. This menu can be customised to your liking.

The main control wheel is next. You can turn the wheel, and you can also click on the wheel in four directions. There’s also a button in the centre of the control wheel. The function of the left, centre, and right buttons can be customised.

Next, there is the second of the custom button. Then on its left is the playback button. 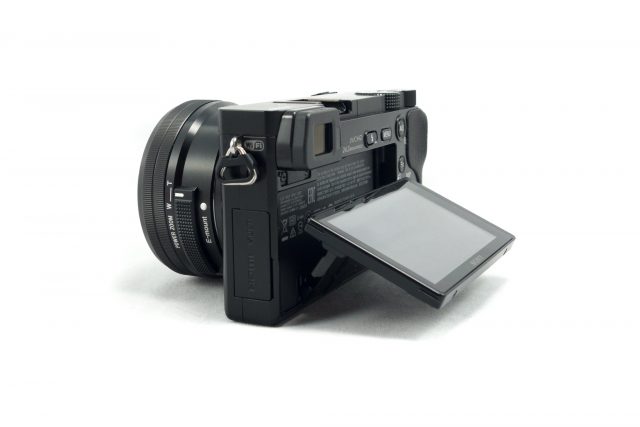 The 3-inch 921,600 dots LCD screen tilts 90° upwards and 45° downwards. You can’t take selfies with this LCD screen, although the remote camera app will work for that. Interestingly, the LCD screen is in 16:9 format. While this works great when shooting 16:9 movies, you do end up with black bars on the left and right when shooting stills. It’s actually not a big problem, in my opinion, because that means the most of the camera information overlays are not positioned on top of the live-view image.

The LCD screen isn’t terribly bright, and under bright sunny conditions. Thankfully the a6000 has an EVF, which works very well no matter how bright the environment. 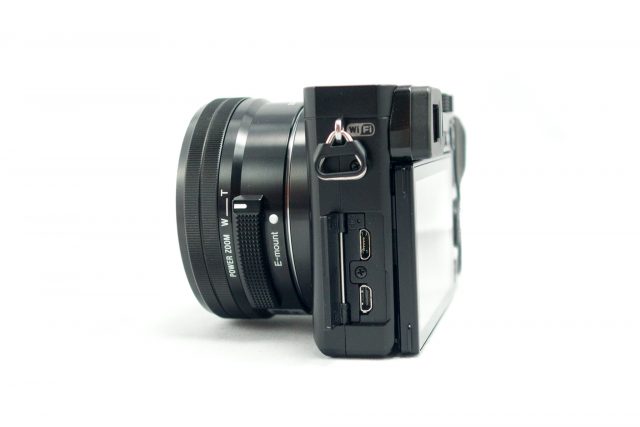 On the left side of the a6000, under the access door, there is a Micro-USB port and a micro HDMI port. There is a small charging indicator above the Micro-USB port. The shoulder strap hook takes 3/8-inch type straps. 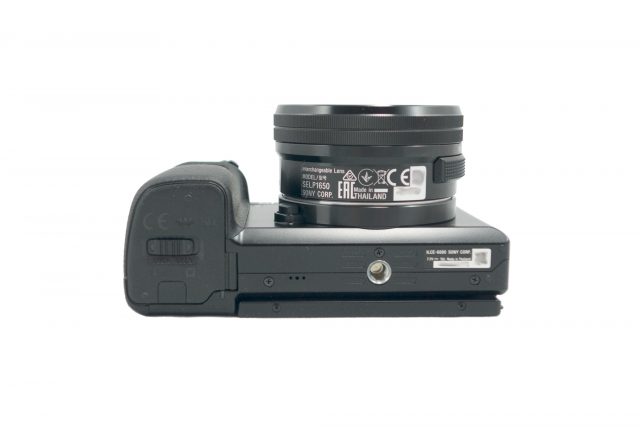 On the bottom, there is a standard tripod socket, and the speaker on the left. The battery door is on the far left. 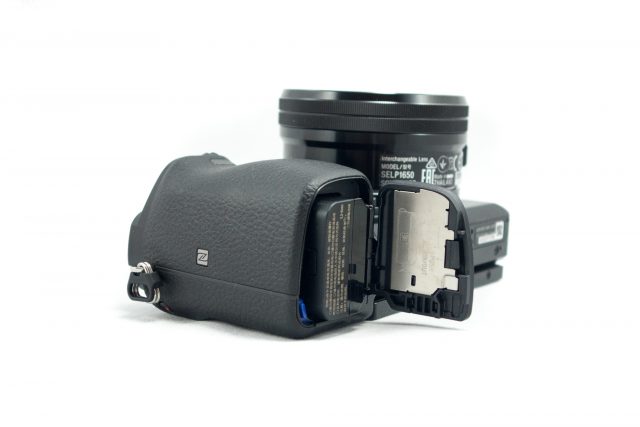 The a6000 uses the common Sony NP-FW50 lithium-ion battery. It is rated for 420 CIPA shots according to some sources, like DPReview. Sony’s official specifications list 310 shots using the EVF, and 360 shots using the LCD.

The battery compartment also houses the memory card slot. Both SD memory cards Sony Memory Sticks are supported. The a6000 supports the UHS-I bus on SD memory cards, so it will benefit from the greater speed of those SD card types.

The a6000 is available in black (reviewed here), silver, and white colours.

I’ve only just covered the physical tour of the a6000 body. There’s still so much to write about, including its camera operation, general handling, image quality, etc. Then there’s the kit power zoom lens too. I’ll save that for the next installment. Stay tuned!