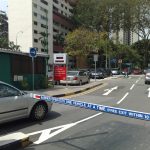 After complaining about cyclists, the next is about pedestrians. Actually, by and large they are quite okay. Pedestrians are slow moving. Apart from the occasional inconsiderate people who walk in a sufficiently large group to obstruct an entire footpath, it’s not as if we really need to come up with rules or guidelines about how pedestrians should use their footpaths. That’s assuming, of course, they stick to their footpaths. I think, the trouble begins when they start using the roads.

Often times, I see pedestrians walking on roads. One of the possible reason is that the footpaths are interrupted repeatedly by driveways into private landed properties, and which sometimes are occupied by vehicles, thus causing inconvenience to pedestrians having to weave in and out around them. Or perhaps the footpaths are not straight enough, not level enough, not wide enough, etc. Never mind all that.

Some pedestrians, however, simply forget they are on a road or crossing a road. Or they take it for granted that motorized vehicles will give way to them. For example, the other day, while I was walking towards a traffic junction, coming to a stop because it was “red” for me, I saw a jogger zipping past me, in the same direction, right into the crossing. He didn’t even slow down, pause to look for traffic (yeah, perhaps you can argue that he could have surveyed the traffic before reaching the junction, but obviously he failed to do so in this case), but simply jogged across the junction as if the road wasn’t there. Then, it so happened that a pick-up truck came along, had to jam brakes, to avoid this jogger. He was startled for a second, but then simply continued to complete the crossing, without so much as to apologize for having caused panic to the driver.

Then just this morning, this time I was driving, a pedestrian wearing a pair of earphones, strolled in the middle of a road. First of all, I think all pedestrians should learn this basic thing: For goodness sake, you need your ears to hear traffic. Please don’t put on any earphones or headphones when you are near the road. So, anyway, obviously this pedestrian was oblivious to my car behind him. I got impatient after a while and gently-as-I-could sounded my horn. He turned around, startled, then gave the kind of unfriendly look as if you say “what’s your problem”. Hello, this is a road.

It’s particularly a problem on smaller roads, car parks, private estates, etc, where some (too many) pedestrians simply don’t care about the difference between footpaths and roads. It’s almost as if they’ve decided they belong on the road and deserve to share the road with motorized vehicles. Perhaps they are inspired by the cyclists’ fight to share the road.

I think, we need some pedestrian education.